As news of the devastating effects of climate change and global warming keeps increasing day by day, we all need to figure out how to live in a sustainable and eco-friendly manner. Of course, when we do this we only focus on our lives. We hardly ever think of the body we leave behind when we die. Even that has a carbon footprint which can be reduced. In an effort to solve this problem, a few designers gathered together and came up with something truly unique – The Infinity Burial Suit. It is made out of threads which have been infused with spores from mushrooms.
The suit is intended to make any pollutants in the body ineffective. Mushrooms start sprouting from the thread and they nourish themselves using the body. Despite being a controversial creation, sales commenced over three years ago.

The interesting skill that mushrooms possess which enables them to clean up a lot of toxins from our surroundings is called Mycoremediation and this is the concept that the suit itself is based on. According to Jae Rhim Lee, one of the minds behind this idea, when the time came to think about this issue, she took inspiration from mushrooms, the best cleaners nature has to offer.
As of now, each suit is worth about $1500 and customers can order them online. After the success of their initial venture, these designers are now trying to create something similar for animals called Infinity Pods. 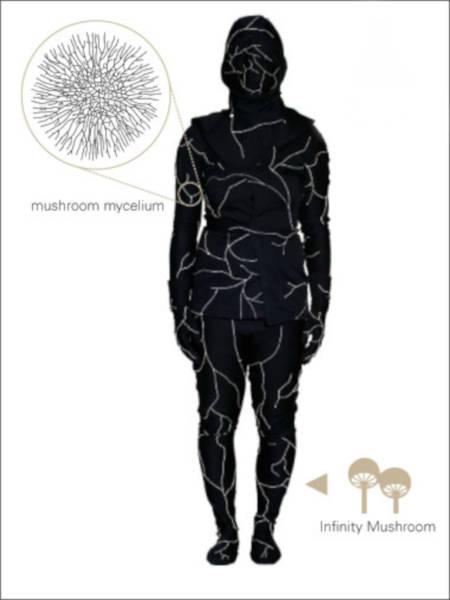 While it can be a little gross to imagine an organism feeding on your corpse, the truth is that we needed to find options for burial that cause no harm to the environment. The techniques we’ve used so far only ensure that toxic material from our bodies is ingested by the soil. Many people also build coffins which require trees to be cut down. These coffins are then painted with a lot of chemicals. Bodies are also embalmed in formaldehyde which will eventually pollute the soil.

Though cremation seems like a cleaner option it really isn’t. A massive amount of energy is required to burn bodies and this in itself results in a lot of pollutants being released into the atmosphere. In the UK alone, cremation is the cause of more than 15% of the mercury pollution in the region because people are buried with their dental fillings.

Other ventures like Capsula Mundi and Urban Burial Project have also come up with ideas to bury bodies in an eco-friendly way. Capsula has come up with a building plan which allows bodies to decompose in a natural way. The latter is an Italian company which has created pods that allow bodies to gradually turn into trees.

Many famous people like the late Luke Perry have adopted the mushroom burial suit. Lee hopes that more will embrace the idea of eco-friendly burials as times passes. It is high time that we learn to both accept death and contribute in any way we can to saving the planet.