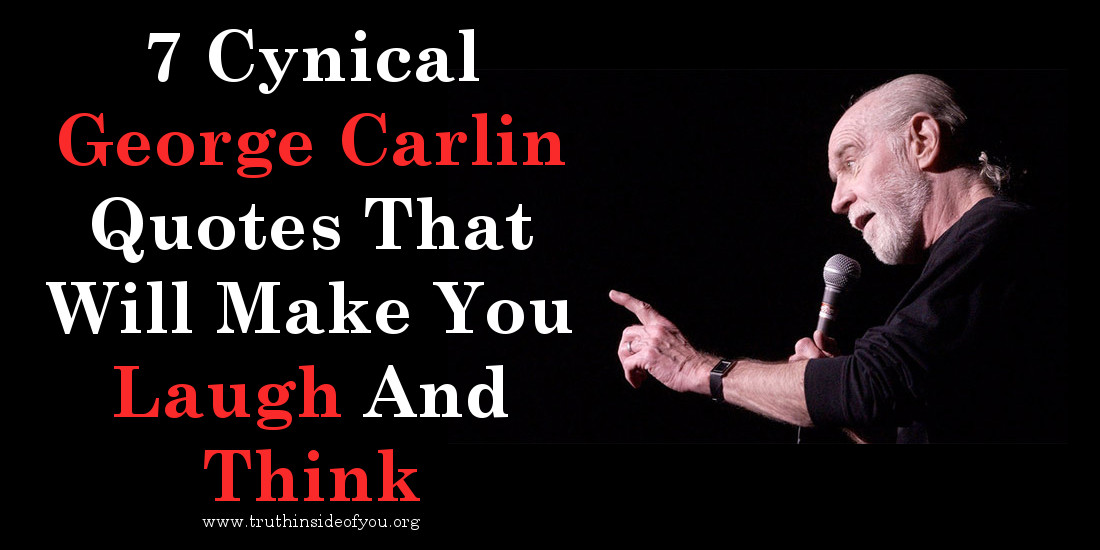 Humor goes beyond slapstick jokes and lame one-liners. If you think about it, it is really powerful in making people sit up and take notice of their own complacency. It can be used to influence how we look at the world and our own society. One of the most influential comedians, George Carlin was adept at making people question things they have always taken for granted.

He was among the precious few who speak their minds and don’t worry about the authorities or popular opinion. In many instances, he used his humor to make people aware of the inherent injustice in the world.

Some of his best humor is a scathing attack on our apathy as humans and the social systems which promote such injustice.

Here are 7 cynical George Carlin quotes that will make you think about the world we live in.

1. “Inside every cynical person there is a disappointed idealist.”

If you think about it, this is actually quite true. We know how unfair the world is. Yet there are some who hope that this all could change. And when they find that they cannot bring the change they want to see, they turn cynical towards everything.

There is no point of an education which doesn’t teach a child to question things. We shouldn’t teach our children to accept everything at face value. Being critical is essential.

3. “There’s a humorous side to every situation. The challenge is to find it.”

We all face many dark times. It is natural as part of the human experience. But instead of giving up, if we can be courageous enough to look for the funny side, it might give us the energy to fight the problem.

4. “Trying to be happy by accumulating possessions is like trying to satisfy hunger by taping sandwiches all over your body.”

In a world where consumerism plagues us, this might give some context to people who are going crazy after a brand name and things. All these things cannot give one the happiness and peace that has to come from inside.

5. “We’ve learned how to make a living but not a life. We’ve added years to life, not life to years.”

Even though we seem to have so much more than the generations before us, yet we still don’t seem to be happy. Contentment is as elusive as ever and this is because we have been too caught up in accumulating material things.

This quote is important because it reminds us that we need to be asking questions, as well as working on their solution. Mindless work without thinking of why you are doing is nothing better than machines really.

7. “I went to a bookstore and asked the saleswoman, “Where’s the self-help section?” She said if she told me, it would defeat the purpose.”