Facts belie the common perception in the western countries that the newly industrialized powers are responsible for much of the deforestation taking place in recent years. It is ironic that their own satellites have proved something which is contrary to general notions. China and its close neighbor, India have, in fact, not just restored but succeeded in increasing their green cover comprising forests, farmland, orchards, and other commercial plantations. 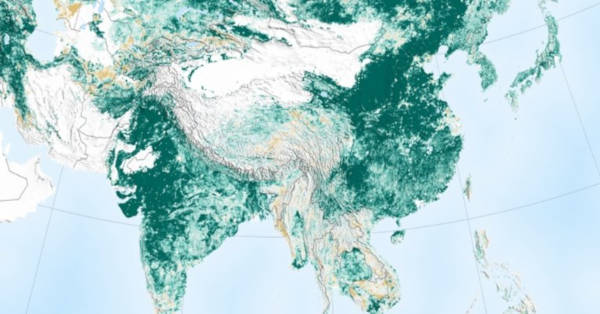 Nature Sustainability, a respected journal published a study by NASA researchers which provided irrefutable proof that the green cover has seen a 5% increase since the turn of the century. Thus, an area as large as the rainforests of the Amazon basin has been established in areas that had no previous rain cover.

The study covers the period from 2000 to 2017. Scientists based their findings on maps and images taken from satellites and compared them. They relied on Moderate Resolution Imaging Spectroradiometer, which provided details from a distance of about 1600 feet from the ground.

Leading author Chi Chen of Boston University elucidates the facts. He says that China and India together have nine percent of the planet’s total land area under vegetation. But, surprisingly, in recent years they contributed to one-third of the total area that has been brought under green cover. This goes against the established feeling that populous countries are responsible for wiping off the green cover through overexploitation of natural resources.

It was once known as the “sea of death”, but after decades of greening, it’s now famed for the “Kubuqi model” that tamed one of China’s most formidable deserts. #desertification pic.twitter.com/07Orh6iZM0

China has been at the forefront of this initiative. They have, in fact, contributed around 25% of the total areas that have come under greenery. Even as far back as in the last decade of the 20th Century, China decided to fight back against the detrimental effects of large scale industrialization and overpopulation on the forest land. The devastating floods in China at the turn of the century were a motivation.

They undertook a massive initiative to alleviate and upturn the negative effects of pollution. Erosion of the topsoil caused by lack of tree-cover, fast deterioration of air quality in the cities which were perennially covered by smog, and the climate change wrought by unregulated deforestation. The pressure to sustain high industrial growth and a population bursting at the seams were together pushing back the green cover. China thus turned into a test-case for climate change. These wastelands converted into forest areas as a result of the planting of trees as a priority for the government.

Unbelievable: #Oasis emerges in hinterland of China’s largest desert, thanks to three decades of greening pic.twitter.com/SlgUp3RtVj 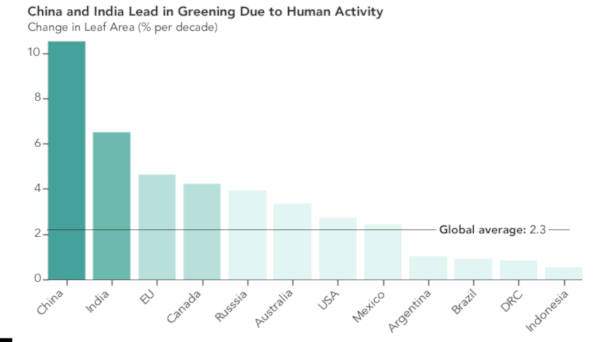 Both nations have encouraged their citizens to undertake large scale tree plantation drives. China took the initiative but in 2017, thousands of volunteers in India set a world record by planting of 66 million indigenous saplings in a day.

Such initiatives are necessary to negate the adverse effects of unchecked industrialization and the population explosion that has affected the planet’s carbon cycle. The situation in South America and South East Asia is still a cause for concern, but research has proved that human beings will take steps once they realize the negative impact of large scale deforestation.

At the same time, this greening trend could take a turn for worse at any point. For example, with increased agricultural cultivation, the groundwater table could be quickly depleting. This negates the general perception that over-exploitation in densely populated areas causes degradation of the land. Nations which have lost their green cover due to rampant industrialization drives have turned around once they realized the long-term loss caused to their citizens. Through judicious land-use, China and India have thus taken the initiative in greening the world. But the drive should concentrate on large areas of continuous and dense forest cover. And we have satellite data to prove it.