Economics is complicated and it’s getting more complicated each day. But we need to learn about it, right? Well, the ‘two cows’ satire and their final fate in the world economy is the best way to crack it. It’s pithy, metaphorical, and funny. Plus, you learn something out of it.

Try to make out what these small explanations about the world economy: 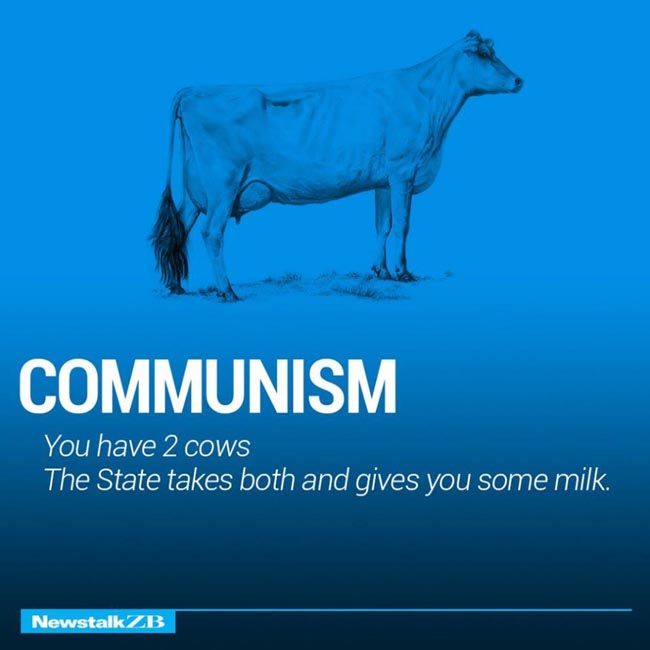 We have all heard this politically-loaded term. Some people love it, some people hate it to bits – there’s no in-between. But it’s also quite complicated. We don’t really know what it means. Now, we have the cows to help us. It’s simple (or not quite). It’s like this: you have two cows, but the state confiscates both and then gives you some milk. Now, you can love or hate communism without ignorance! 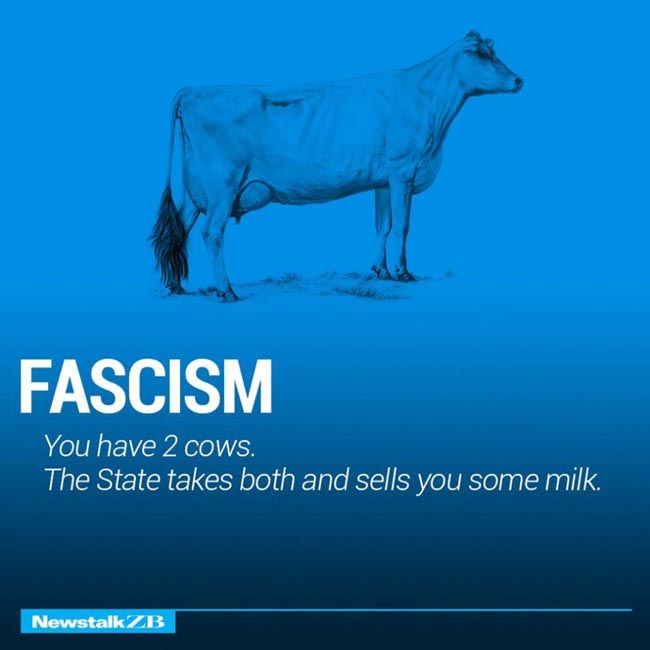 The terrible -ism – once it rose around the World War and now, the word is, it is on the rise again. What does it actually mean? Let the cows explain. If you have two cows, the state takes both – like communism. But instead of giving you some milk – it sells their milk to you! The audacity – no wonder people hate it. 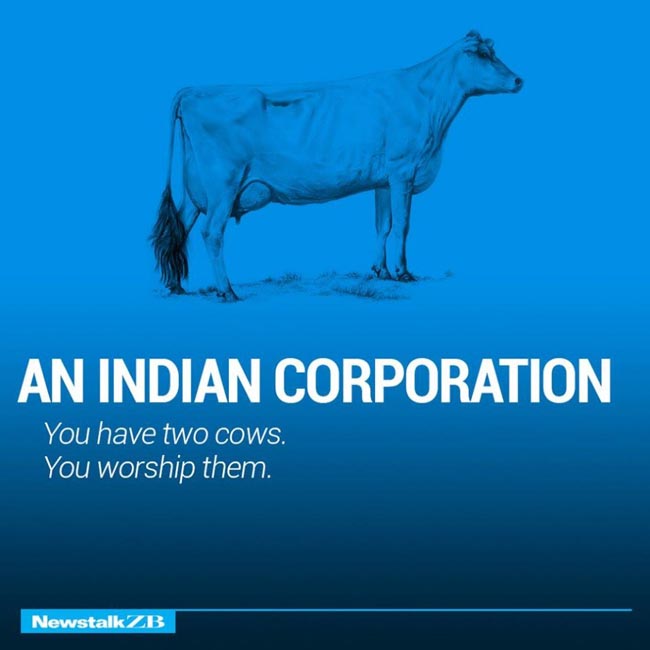 A Land where everything is a God – what can the holy cows show us about it? Well, if you have two cows – you will just start worshipping them as Gods. 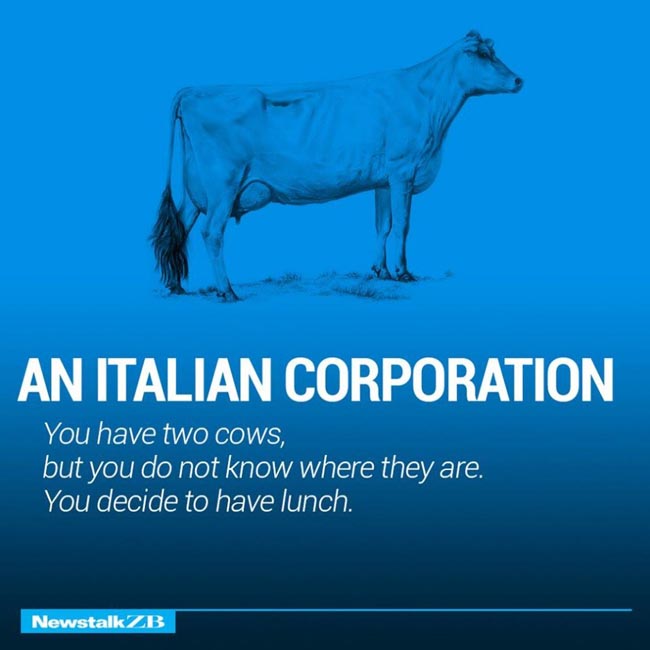 The land of Pizza and delicacies – they will be focused on food of course. So, if you have two cows, what do you do? Well, they can go missing and while you don’t know where they are – you just have to go for lunch before it gets cold. 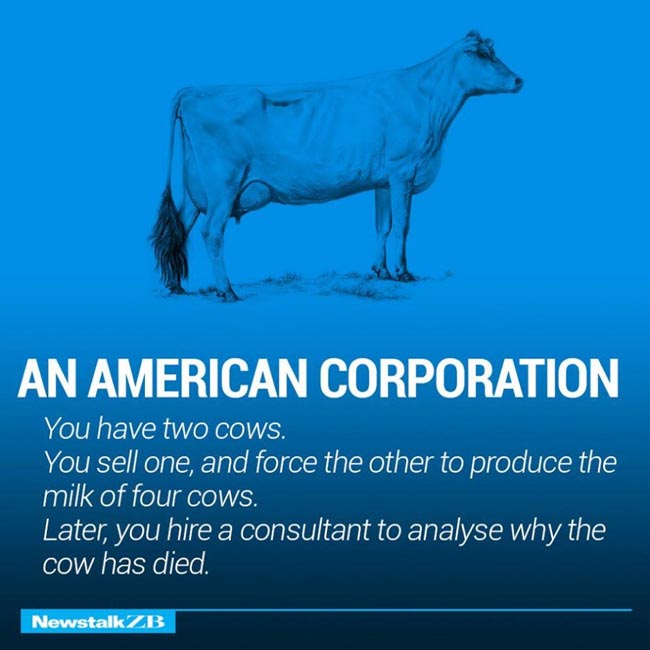 In the land of cutthroat capitalism, what can be the fate of the cows? Well, if you have two cows, you sell one, and then force the other to produce milk that amounts to the production of four cows. And when it dies, you have no idea and hire a consultant to understand the cause. A win-win for all (probably)! 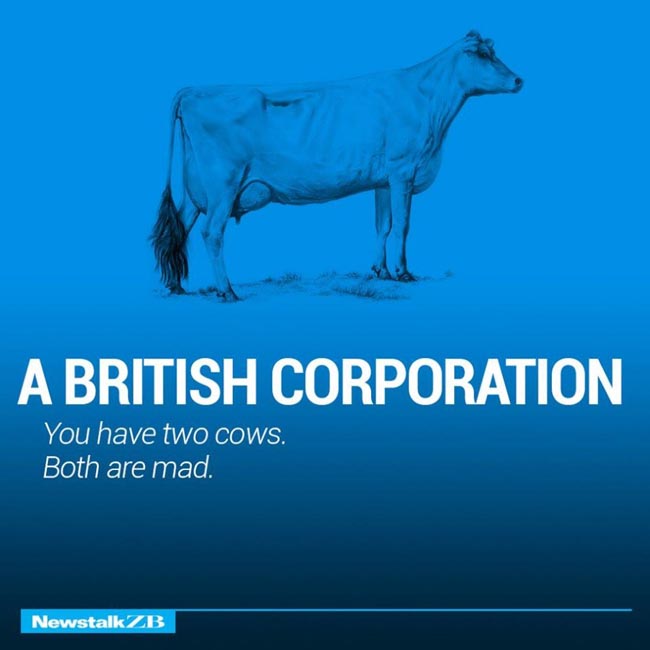 The Brits have it all (un)settled if you look at their present situation – they have two cows. And what would they do with them? Nothing – because both of their cows have gone mad. 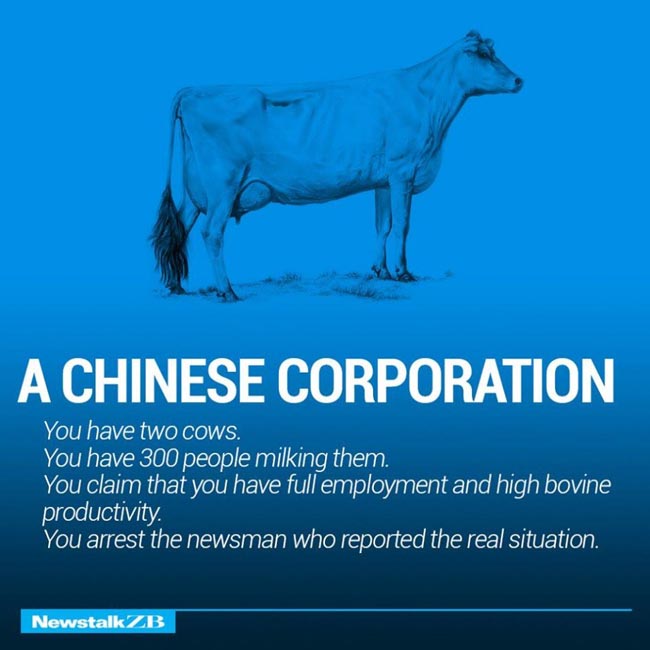 The communist but capitalist China – a strange combination, but they keep it up. Let the cows tell you how – You have two cows and 300 people are milking them. You bring out the report that you have full employment and there is high productivity in the state. But when a reporter comes with the real news, you just suppress it and arrest the reporter – no questions asked. 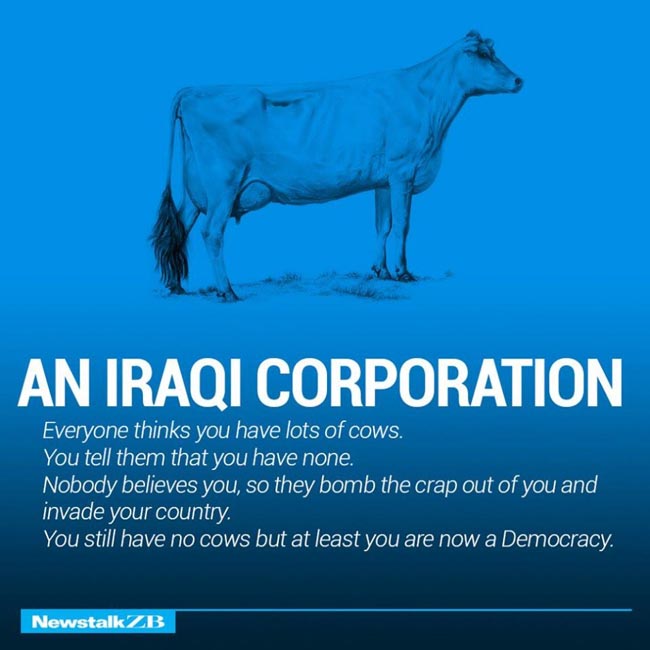 Nobody really believes you when you say that you don’t have cows. So, just as a warning or a test, you get bombed and invaded. You are devastated – but now, at least you have a democracy. Remember the nuclear weapons? 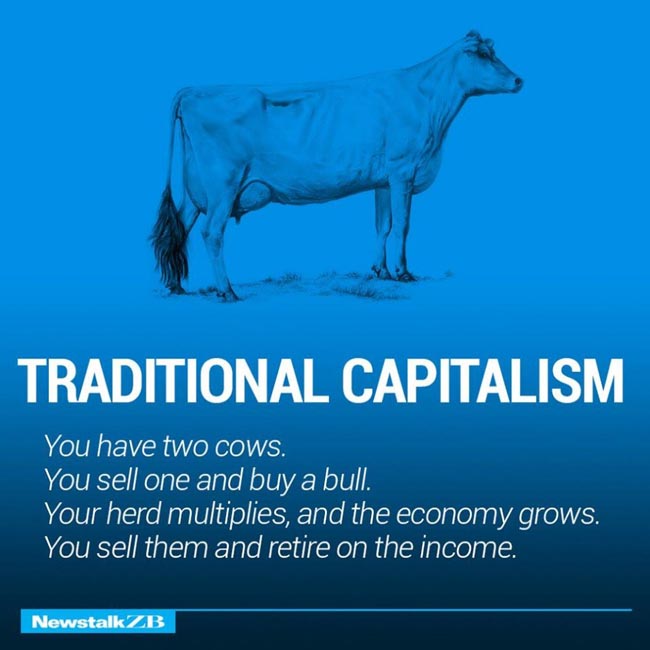 As of now, this seems the only thing that’s working and it works for a reason. Let’s say you have two cows. Now, you get an idea and sell one cow, purchasing a bull instead. Now, your herd starts multiplying and you have more production. As you grow older, you sell the cows and retire, living a happy life. 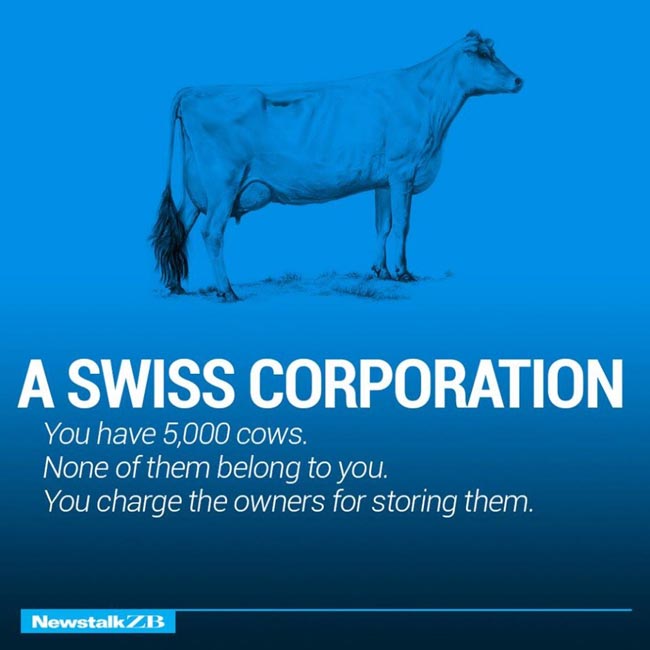 The Swiss love storing other people’s stuff and money. It’s like they have 5,000 cows – but they own none of them. They just make you give them storage charges. 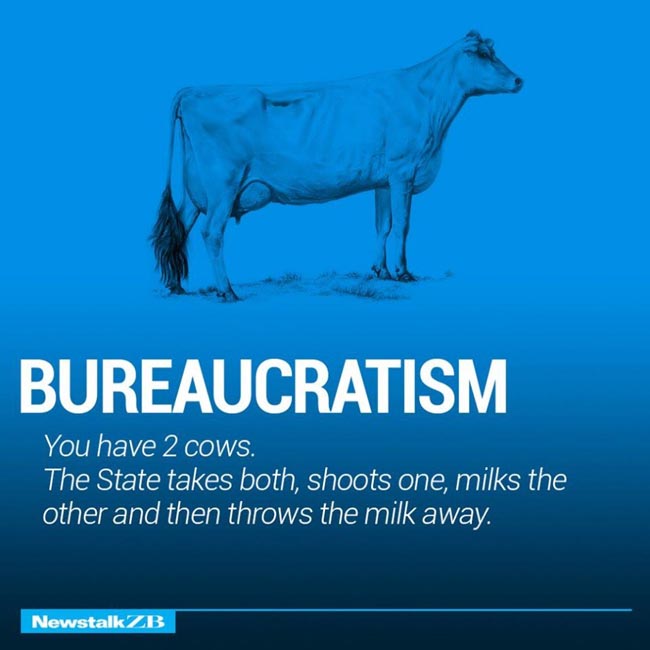 The dreaded system that makes the normal public stay away from government offices – what is bureaucratism? It’s a simple system actually – the State takes both your cows, kills one, collects milk from the other, and then just throws the milk away. You get nothing! 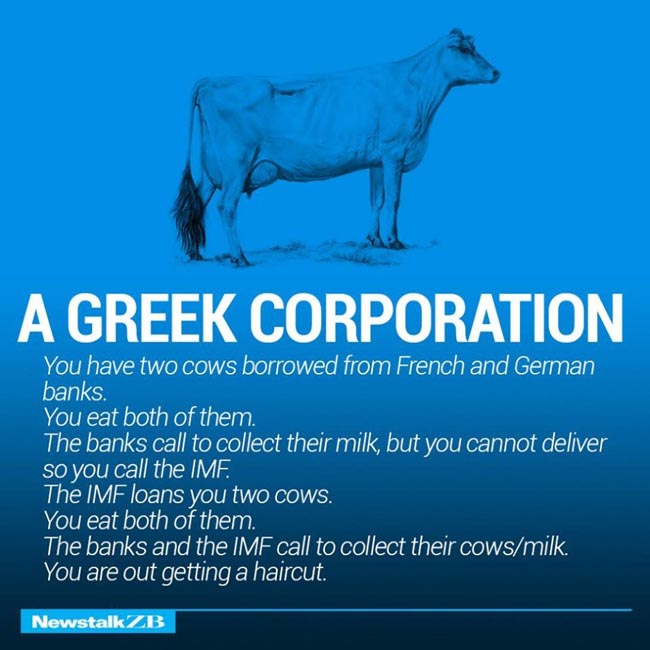 Know the news about Greece and their economic downfall? The cows will explain better – think of it this way: you don’t have a cow so you borrow two from German and French banks. But you just eat them up. They want to collect the milk but you can’t provide them with any, so you ask for cows from the IMF. The IMF gives you a loan: two more cows. You eat them up too! Now, when the IMF is calling you to get back their cows or at least the milk produce – you are not responding anymore! 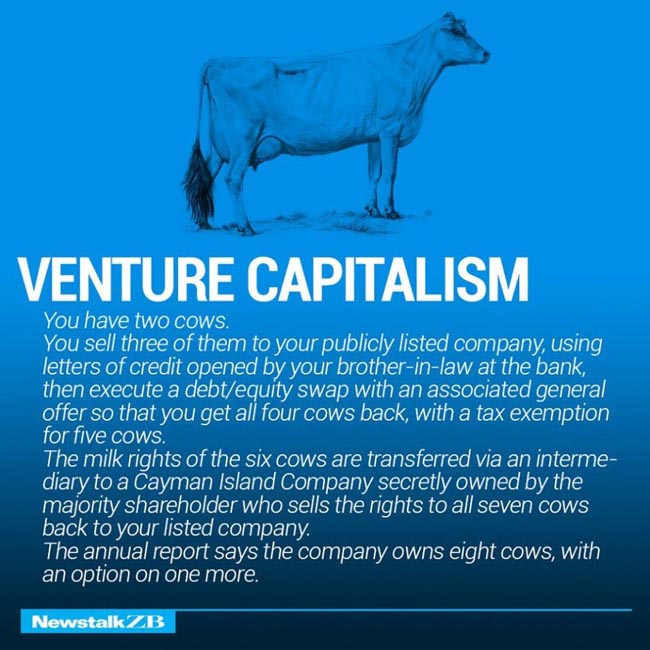 Even for cows – Venture Capitalism is a tough nut to crack. Their complicated take on it is like this: if you have two cows, you sell them as three to your public company. You use the influence of your relative at the bank and execute a debt/equity swap, with the offer to get four cows back and tax exemption on five cows. Then you transfer the milk rights of six cows to an intern-dairy in a distant island secretly owned by your majority shareholder, who then sells you the rights of seven cows. So, now your annual report shows you have eight cows, and an extra option of one more! 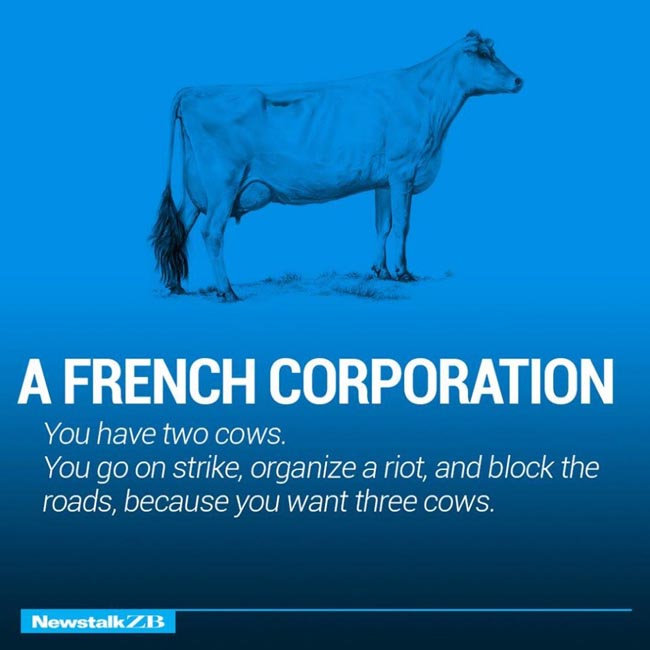 The French love their French revolution – the yellow jackets are proof. So, if you have two cows, you won’t be satisfied – you’d rather go on a strike, block the road, conduct riots and make a scene because you want one more! 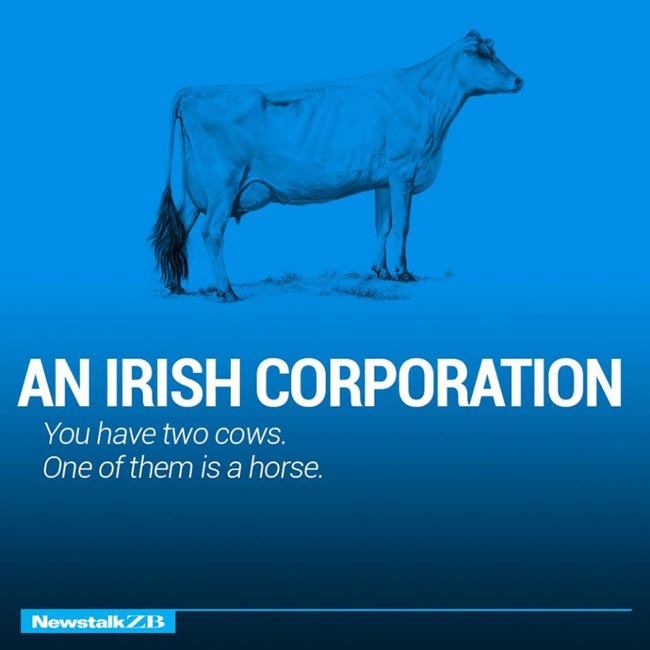 The stereotype of the Drunk Irish is played yet again by the cows – you have two cows. But look carefully with sober eyes. You might find out one of them is actually a horse! 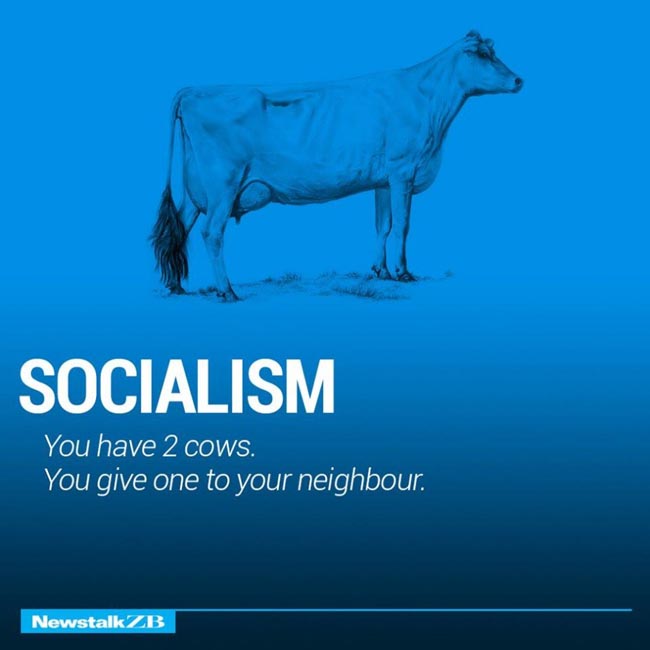 Sharing is caring. You have two cows – but you only need one. So, you are kind enough to give one cow to your neighbour. 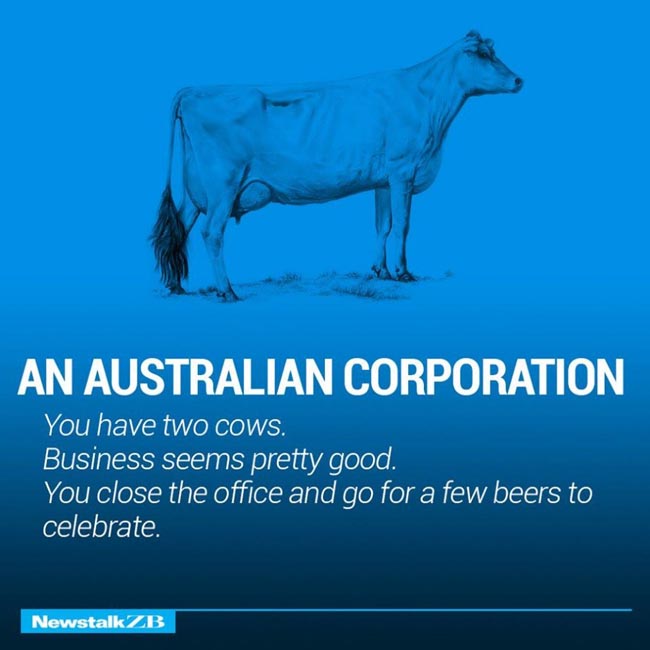 Happiness has to be celebrated with drinks and no one knows that better than the Aussies. If they have two cows, they will check their business. Is it going well? If the business is all good and hearty, they will close down their office, gather their mates, and go out for a celebratory drink. They deserve it!

So, did the cows teach you something? All it takes is just a change of thinking and we can learn so much more. The cows can really show us the way if we follow them!