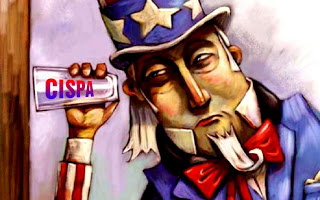 Give them an inch and they will take a mile. That is how power-hungry tyrants interpret any law. The PATRIOT Act and the FISA court led to the blanket wiretapping of every American citizen and a PRISM, spy programm  lens into all Internet activity for the NSA.Now we are supposed to trust this Peeping Tom government by giving them more authority for “cybersecurity” with the Cyber Intelligence Sharing and Protection Act (CISPA)?

As George W. Bush once eloquently said with his patented deer-in-the-headlights conviction “Fool me once, shame on you. Fool me, you can’t get fooled again, see.”
Oh, I bet the American people will get fooled again. But it’s not their fault. When authority figures tell bald-faced lies to the public, most people instinctively want to believe them because the majority of people are honest and perceive others to be honest.
Obama won the presidency promising to overturn Bush’s draconian destruction of civil liberties in the name of fighting terror. The majority of Americans took Obama at his word and gave him the benefit of the doubt. Until now.

Renewed concerns about the spy agency’s domestic surveillance programs could also hamper efforts to give it a broader role in defending the country’s infrastructure, and put pressure on lawmakers to update laws protecting online privacy, say congressional aides and defense and security experts.

“They’re going to make it harder to do the work that is now going on,” said former chief Pentagon weapons buyer Mike Wynne, who also served as Air Force secretary from 2005 to 2008.

Wynne said growing unease about domestic surveillance could have a chilling effect on proposed cyber legislation that calls for greater information-sharing between government and industry.

But this is laughable. The U.S. government already has been illegally using the authority in CISPA prior to it being codified into law. At least everything Hitler did was “legal” before he did it.
PRISM reportedly forces Internet companies to hand over information to the NSA and FBI. Some even allow a backdoor to their servers. This program has been in place for several years according to reports.
The only difference between the secretive PRISM project and CISPA is that under CISPA personal data will be given to the civilian Department of Homeland Security and the Pentagon by communications companies instead of the NSA. Like that matters.

But even this is just window dressing for public consumption because Obama already has authorized these moves with the secret Presidential Policy Directive 20 and an Executive Order.
Presidential Directive 20 shows that the government is drawing up a target list for offensive cyber strikes overseas, and the Executive Order outlines the flow of illegally obtained data of online activity to the DHS, NSA, and other agencies.

Yes, the Pentagon already assumed the role of engaging in cyber war as part of their “operational domain” for “offensive operations”, again prior to any legal authority. In July 2011, the Pentagon announced “The United States reserves the right, under the laws of armed conflict, to respond to serious cyber attacks with a proportional and justified military response at the time and place of our choosing.”

Their “authority” was later affirmed in the infamous 2012 NDAA which gave the U.S. military the right to launch a global offensive cyber war against perceived threats.

Section 954 of the NDAA titled Military Activities in Cyberspace received no debate in Congress as well as in the media. The section states clearly:

Congress affirms that the Department of Defense has the capability, and upon direction by the President may conduct offensive operations in cyberspace to defend our Nation, Allies and interests.

And thanks to whistleblowers we know that telecom companies have been cooperating with government spooks for years.
Significantly, all of this occurred without any public debate, probably because lawmakers understand that it’s a gross violation of the 4th Amendment which guarantees privacy to American citizens.Indeed, the NSA issued a secret memo urging lawmakers to “rethink” the 4th Amendment. This recently declassified memo from 2001 reads:

The Fourth Amendment is as applicable to eSIGINT as it is to the SIGINT of yesterday and today. The Information Age will however cause us to rethink and reapply the procedures, policies and authorities born in an earlier electronic surveillance environment.

Is it any wonder why Americans no longer trust their government?

As President Obama said in his press conference defending the secret spying program: “If Americans don’t trust government, we’re going to have some problems.”