Home » Shocking Footage Of Africans Being Sold At Open-Air Slave Markets In Libya.

The rapes, torture, and slave markets of thousands of African migrants in Libya, that now the leaders denounce, were known long ago.

A global outcry has erupted on 14 November from a documentary published by the American television network CNN.

The documentary shows Africans sold into slavery in Libya, a country that is a hub for many migrants who attempt to arrive in Europe.

The UN Secretary-General Antonio Guterres stated “shocked”, the Chairman of the African Union Alpha Condé “outraged”, the European Union «disgusted» and France called for an emergency meeting of the Security Council UN.

“This is hypocrisy because everybody knew, governments, international organizations, political leaders,”  said Hamidou Anne, a Senegalese analyst for the organization L’Afrique des Idees.

“The captures, the violence, the torture, and rape is a common practice in Libya and the talks about the slave markets take a long time,” notes Alioune Tine Director for West Africa of Amnesty International, based in Dakar. 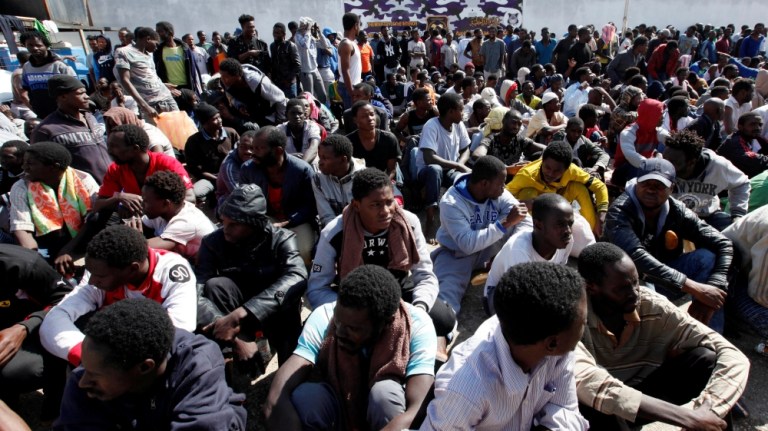 Among the chaos that still prevails in Libya after Gaddafi’s regime, the country is a hub for migrants from Africa wanting to reach Europe.

“In Libya, black people have no rights”, complained in September Karamo Keita, a 27-year-old young man from Gambia. “We have gone in many farms, where the Libyans, sold us for slaves”.

For their part, the refugee relief organizations have not stopped to warn about the deterioration of the situation.

Already in April the International Organization for Migration (IOM) reported that there were slave markets in Libya.

«They treat people as products for sale, and disposal when they do not have any value, ” said Leonard Doyle, IOM representative in Geneva.

The President of Médecins Sans Frontières (MSF) Joanne Liu wrote an open letter to European Governments, describing it as “a flourishing business of kidnappings and extortion in Libya.

“In their efforts to restrict the migration flow, European governments are ready to assume the cost?” she asked the question. Before coming to a point: “We can’t say we didn’t know.”

Last week the UN High Commissioner for human rights Zeid bin Ra’ad al-Hussein had described “inhumane” the EU policy. Which consists of helping the Libyan coast guard to stop and send back the refugees.

Brussels dismissed the accusations and emphasized the efforts “to save lives” at sea and to ease access to IOM and UNHCR in detention centers in Libya.

“Europe has a fundamental responsibility for the current tragedy but not the only one to blame”,  said Tine.

African countries do nothing to keep their youngsters, to offer them work. They do not have a migration policy, all they do is to obey, ” he notes.

The internationally recognized Government of Libya pointed out that the results of the research will not be delayed and that those responsible will be dealt without leniency.

“They have to conduct research that will shed light on this affair to find those responsible for these acts in order to bring them to justice,” noted Al-Aref al-Khoga Home Secretary of Libya.

The video below is the story of 21-year-old Victory.