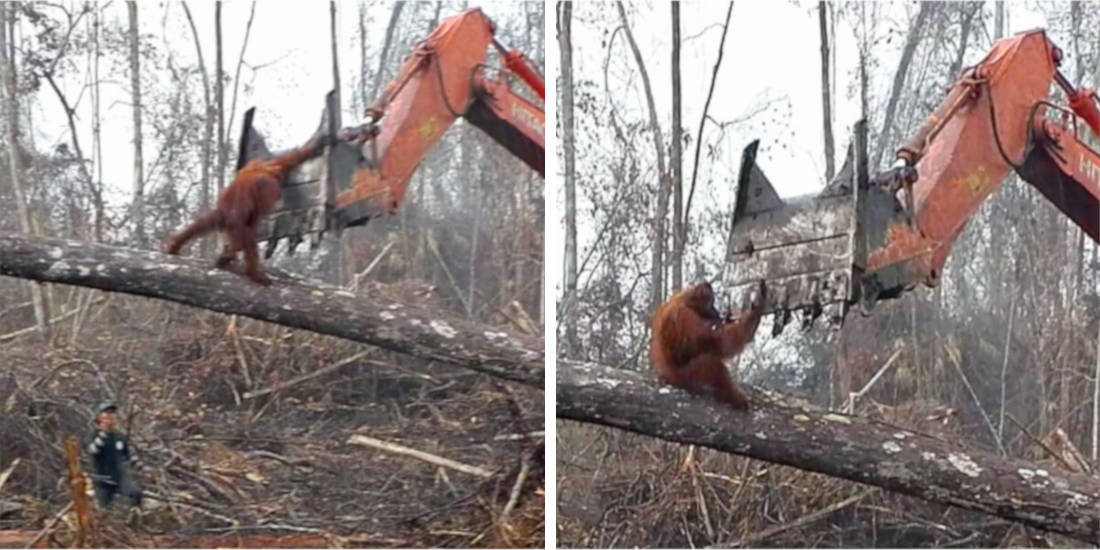 How long are we going destroy the lives of animals? After a while, our own conscience should be cursing us for the things we do. Ironically, there are countless NGOs like the International Animal Rescue working overtime to ensure the safety and the well being of these animals from the destructive hand of humans. Wonder what gives us the right to do so. Simply because we can talk and think? But honestly, if thinking leads to ideas of destruction, maybe thinking is a tad bit overrated.

These photos show an innocent orangutan that is witnessing its home being destroyed by humans in their endeavor to succeed. The orangutan tries to fight an excavator, but is unable to, due to its small size. It really does make one wonder! How can a human being not get moved by the plight of the animal that is trying to save its home, simply trying to live? And it does beg the question- have we come this far as humans that humanity is going extinct?

Fortunately, there were a few animal activists in the area who took care of the orangutan and relocated it to another forest. But, would it still be the same if a human was displaced in the same way? Wouldn’t there be a substantial amount of hue and cry? The point which we need to understand is this- the earth is just not our own. If we have the right to live, so does every other species born on this planet.

Sungai Putri forest is one of the few places left that take in Bornean orangutans. Even this forest is under threat of expansion of factories. What is even sadder is that there is no natural answer to this. It is simply us, humans, who are doing it. A recent investigation indicated that Indonesia was home to large scale illegal logging settlements that took place mainly at night all the while displacing the orangutans and their babies.

It is ironic that the photo of the orangutan fighting the excavator resembles many of the superhero movies that we watch. The movies come to a happy end, with the superhero defeating the bad guys, but what happens to the animals that are fighting for their lives? Do they get a happy ending? Most of them are killed, or captured, or their homes destroyed. There have been several warnings issued by the forest departments, people continue to poach and destroy forests for their own personal needs.

It is vastly depressing that the orangutan, who has no idea of what is happening, has to fight against something it has no power over. And that is the case with most animals throughout the world. Even after being placed on the endangered list, they are still not protected to the level they should be. That is enough reason for it to go extinct in the next few years.

These animals have been slowly depleting in number. It is our duty as human beings to protect all the creatures we coexist in this planet.