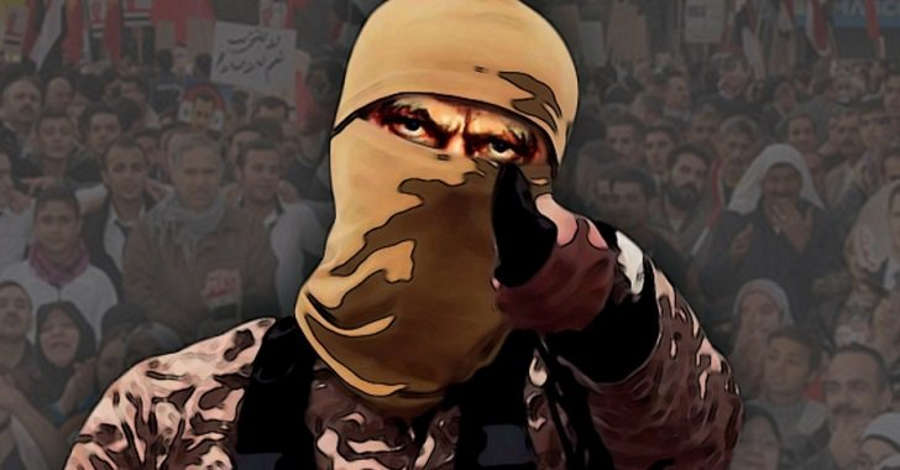 The Department of Defense spent over half a billion dollars funding fake news reports and terrorist propaganda videos in Iraq during the American-led war, according to a new report.

The Bureau of Investigative Journalism broke the story Sunday that  “between 2006 and 2008, more than 40 companies were being paid for services such as TV and radio placement, video production, billboards, advertising and opinion polls” in Iraq.

One company, in particular, dominated this realm of the military-industrial complex.

British PR firm Bell Pottinger was awarded $540 million in contracts for “information operations and psychological operations” between May 2007 and December 2011, totaling over $100 million per year. A similar contract from 2006 reportedly totaled $120 million, the Bureau reported.

One former employee, Martin Wells, spoke to the Bureau about his time working in Iraq for Bell Pottinger and, by extension, the U.S. military. The secretive facility was located at Camp Victory, a military base located near Baghdad.

“It was a very secure building,” he recalled, with “signs outside saying ‘Do not come in, it’s a classified area, if you’re not cleared, you can’t come in.’”

Bell Pottinger employed over 300 British and Iraqi workers for its propaganda campaigns, which were overseen by the Pentagon, the CIA, and the National Security Council until 2011, at which point the company ceased operations in the country.

Until then, “the firm’s output was signed off by former General David Petraeus – then commander of the coalition forces in Iraq – and on occasion by the White House,” according to Wells.

Though Bell Pottinger was initially hired in March 2004 to promote the upcoming elections in Iraq, the firm eventually shifted to less “high-profile” assignments.

Under the project, Bell Pottinger came to produce three types of content. According to a former contractor who spoke with the Bureau:

“White is attributed, it says who produced it on the label. Grey is unattributed and black is falsely attributed. These types of black ops, used for tracking who is watching a certain thing, were a pretty standard part of the industry toolkit.”

White operations were relatively straight forward, comprised of commercials painting al-Qaeda in a negative light. Grey and black operations, on the other hand, highlight some of the most deceptive practices employed in the American government’s information wars.

Grey operations, according to Wells, were made to look as if they had been “created by Arabic TV.”

“Bell Pottinger would send teams out to film low-definition video of al Qaeda bombings and then edit it like a piece of news footage. It would be voiced in Arabic and distributed to TV stations across the region,” the Bureau explained, noting “[the] American origins of the news items were sometimes kept hidden.”

Black ops, unsurprisingly, were the most nefarious. According to Wells, Bell Pottinger created fake al-Qaeda propaganda videos. He recalled the instructions he received to produce them:

“‘We need to make this style of video and we’ve got to use al Qaeda’s footage…We need it to be 10 minutes long, and it needs to be in this file format, and we need to encode it in this manner.’”

The videos were put into CD format, and Marines would distribute them while they were conducting raids on Iraqi homes, Wells claimed.

“If they’re raiding a house and they’re going to make a mess of it looking for stuff anyway, they’d just drop an odd CD there.”

The intent of the CDs was to track individuals who watched them.  According to Wells, “the team embedded a code into the CDs which linked to a Google Analytics account, giving a list of IP addresses where the CDs had been played.”

“If one is looked at in the middle of Baghdad…you know there’s a hit there. If one, 48 hours or a week later shows up in another part of the world, then that’s the more interesting one, and that’s what they’re looking for more, because that gives you a trail.”

Wells said the CDs turned up in Iran, Syria, and even the United States, highlighting the difficulty of controlling manipulative psychological media campaigns. Indeed, the Bureau reports, “it is understood the key people who worked in that unit deny any involvement with tracking software.”

The covert activities of Bell Pottinger and the United States government are morally dubious, but the reason the military opted to use private contractors is even more representative of the duplicitous practices employed in the “War on Terror.”

According to Glen Segell, a former information operations task force employee who worked in Iraq in 2006, “contractors were used partly because the military didn’t have the in-house expertise, and partly because they were operating in a legal ‘grey area.’”

Segell previously wrote that, as the Bureau paraphrased, “U.S. law prevented the government from using propaganda on the domestic population of the US. In a globalised media environment, the Iraq operations could theoretically have been seen back home, therefore ‘it was prudent legally for the military not to undertake all the…activities.’”

Americans saw the military’s own propaganda, regardless, as the CDs soldiers distributed were tracked back to the United States. Further demonstrating the fruitlessness of the military’s reasoning, the law in question appears to have been repealed since this program ceased.

Regardless, Bell Pottinger reportedly shut down activities in Iraq following the removal of ground troops in 2011. Lord Bell, who stepped down as chairman of Bell Pottinger earlier this year, believes they were on the right side of history.

“We did a lot to help resolve the situation,” he reportedly told the Sunday Times. “Not enough. We did not stop the mess which emerged, but it was part of the American propaganda machinery.”

A 2015 study by the Rand Corporation, a military think tank, found “generating assessments of efforts to inform, influence, and persuade has proven to be challenging across the government and DoD.”

Wells, for his part, leans more toward the Rand Corporation’s assessment than he does Lord Bell’s. Though he joined the operation believing it was worthwhile to raise awareness about al-Qaeda’s ruthless violence, his views have shifted over the years.

“Somewhere in my conscience,” he said, “I wondered whether this was the right thing to do.”

Perhaps the most telling revelation of this story is that years after the military hired Bell Pottinger, the United States is backing groups with ties Al-Qaeda — the very terror group the secret propaganda campaign was intended to defeat.