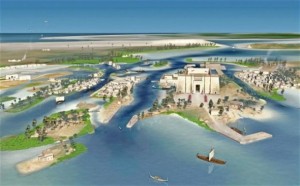 For centuries , town Heracleion believed to be a legend, one of the most important trade centers in the Mediterranean area before it disappeared 1,200 years ago, in area of the Bay of Aboukir, near Alexandria. Now has been brought back to the surface with the help of 3D.

Dr Damian Robinson, director of the Oxford Center for Maritime Archaeology at the University of Oxford, told the Telegraph:

“The site has amazing preservation. We are getting a rich picture of things like the trade that was going on there and the nature of the maritime economy in the Egyptian late period.There were things were coming in from Greece and the Phoenicians.”