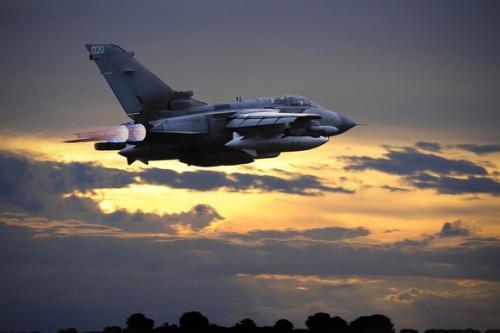 As the US officially enters the Yemen military campaign, the UK appears ready and willing to precipiate a catalytic event from which there is no going back. With relations between Russia and the West at post-Cold War lows and deteriorating fast, Royal Air Force (RAF) pilots have been given the go-ahead to shoot down Russian military jets when flying missions over Syria and Iraq, if they are endangered by them. The development comes with warnings that the UK and Russia are now “one step closer” to being at war, according to the Sunday Times.

While the RAF’s Tornado pilots have been instructed to avoid contact with Russian aircraft while engaged in missions for Operation Shader, the codename for the RAF’s anti-Isis work in Iraq and Syria, their aircraft have been armed with air-to-air missiles and the pilots have been given the green light to defend themselves if they are threatened by Russian pilots.

“The first thing a British pilot will do is to try to avoid a situation where an air-to-air attack is likely to occur — you avoid an area if there is Russian activity,” an unidentified source from the UK’s Permanent Joint Headquarters (PJHQ) told the Sunday Times. “But if a pilot is fired on or believes he is about to be fired on, he can defend himself. We now have a situation where a single pilot, irrespective of nationality, can have a strategic impact on future events.”

Where things get tricky is the qualifier “if he believes he is about to be fired on” – since this makes open engagement a function of threat evaluation in real time during stressed conditions, the likelihood of an escalation that could result in two warplanes shooting at each other, just jumped significantly.

The RAF Tornados aircraft will be armed with heat-seeking Advanced Short Range Air-to-Air Missiles (Asraams, also called AIM-132 missiles), the IBT adds. These weapons, which cost £200,000 each, have a longer range than other air-to-air missiles, allowing RAF pilots to shoot down enemy aircraft without being targeted themselves.

Providing cover to the largely underreported, if substantial escalation, according to the Sunday Times report an appraisal carried out by UK defence officials said: “It took six days for Russia to strike any Isis targets at all. Their air strikes have included moderate opposition groups who have been fighting to defend their areas from Isis. Among the targets hit were three field hospitals.” In the past 24 hours Russia’s Defence Ministry said that it has continued its air strikes on IS positions in Hama, Idlib, Latakia and Raqqa. It reported that the attacks resulted in the “complete destruction” of “53 fortified areas and strong points with armament and military hardware”, seven ammunition depots, four field camps of “terrorists”, one command centre, and artillery and mortar batteries.

Russia has countered that US airstrikes have failed to make much of an impact on ISIS targets, and as reported last month, a “mistaken” strike by the US coalition forces killed over 60 Syrian soldiers in a move Russia accused of being a provocation to war.

The Sunday Times’ report quoted a defence source as saying: “Up till now RAF Tornados have been equipped with 500lb satellite-guided bombs — there has been no or little air-to-air threat. But in the last week the situation has changed. We need to respond accordingly.”

But another source of the original story summarized the severity of the situation best when he said that “we need to protect our pilots but at the same time we’re taking a step closer to war. It will only take one plane to be shot down in an air-to-air battle and the whole landscape will change.”