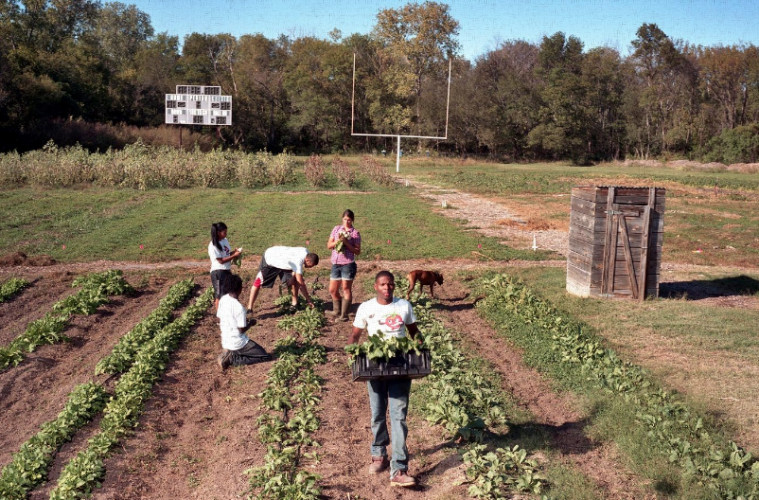 Nine years ago, when the historically black school Paul Quinn College in Dallas was in financial crisis and had a 1% graduation rate, a new school president turned everything over, including the football field.

“There’s more than one field of dreams,” said the school’s president, Michael Sorrell, who had no experience running a college. He urged that a student’s future shouldn’t necessarily be tied to their athletic success.

Knowing the school couldn’t afford athletics, he chose to support student success in other ways by turning the field into an organic farm, which now generates more than 20,000 pounds of organic vegetables annually. These vegetables make their way into high-end restaurants and into the Dallas Cowboy’s stadium.

At Paul Quinn College, every student must work 150 hours to fulfill their tuition at the school. It’s the first urban work college in the nation, and its president says the new program has changed the narrative of the institution.

“Our students learn what it means to be effective and to have job skills and work skills,” said Sorrell.

Students are assigned jobs from day one, and then use an app called UAttend that records their work college hours.

“Eighty-three percent of our students are Pell Grant-eligible, which means, by and large, that their families have a dysfunctional relationship with wealth and with work,” Sorrell explained. “So if you have never been in an environment where you have come to understand the expectations of a career, because all you have ever seen is people be underemployed or unemployed, then how are you going to learn that?”

During a student’s first two years at Paul Quinn, they are given on-campus jobs, many of which require contact with the public. This allows them to develop and improve their communication and problem-solving skills. During the last two years of their college career, they’re working off-campus in companies or other businesses that correlate with their career aspirations.

“Our students are getting two forms of education. They’re getting a rigorous liberal arts training, and they’re also getting real world work experience,” Sorrell said. Unless students are on the farm, they wear business attire — or face a steep fine.

Student Destiny Modeste is interning at Slingshot, an advertising agency in downtown Dallas. Her employer pays Paul Quinn College $7,500 per school year for Destiny’s work. “Having the opportunity to work and help pay your tuition at the same time at an actual agency and see what they do on a daily basis, and then maybe, at the end, they offered a job, that’s very important to me,” she explained.

“There is no employment training program that will cost as little as $15,000. This is an investment in improving the talent pool of your company and your office,” Sorrell said.

And while career and college are part of Sorrell’s vision, community service is also a large factor as well. “We believe that colleges have a fundamental responsibility, if you’re located in an urban area, to turn outward and address the needs of the communities you serve. We are in a food desert. There’s no grocery store for four miles.

The college donates 10% of the produce from the farm to the surrounding underserved community.