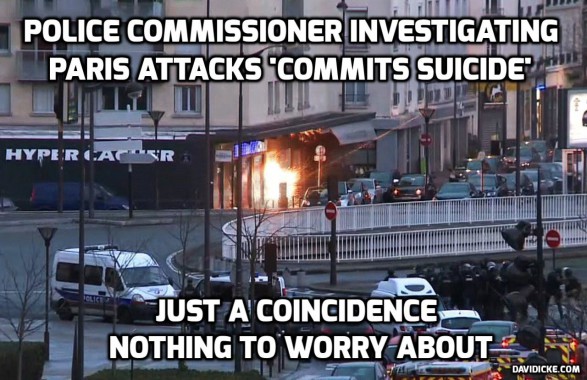 ‘As the dust settles from this week’s terror extravaganza in France, more loose ends are turning up (or being tied up), with this latest bizarre bombshell which is already fueling speculation as to the covert nature of the Charlie Hebdo false flag affair.

A police commissioner from Limoges, France, Helric Fredou, aged 45 (photo, below), turned up dead from a gun shot to the head on Thursday amid the Charlie Hebdo affair. A high-ranking official within the French law enforcement command-and-control structure, Fredou was also a former deputy director of the regional police service.’

At the time of his death, police claim to have not known the reason for his alleged suicide. This was reflected in their official statements to the media: “It is unknown at this time the reasons forhis actions”. However, a back story appears to have been inserted simultaneously, most likely from the very same police media liaisons, who then told the press that Fredou was ‘depressed and overworked’. For any law enforcement officer in France, it would seem rather odd that anyone would want to miss the biggest single terror event the century, or history in the making,as it were.

Here is a link to the original report in the French media, which confirms that Commissioner Fredou was indeed working on the Charlie Hebdo case:

“The Fredou Commissioner, like all agents SRPJ, worked yesterday on the case of the massacre at the headquarters of Charlie Hebdo. In particular, he was investigating the family ofone of the victims. He killed himself before completing its report. A psychological ‘cell’ was set upin the police station.”

EDITOR’S NOTE: It is not yet know to 21WIRE exactly how the fatal gun shot occurred, but if any other past political and high-profile ‘suicided’ cases are anything to go by, then authorities will claim that this victim either shot himself in the back of the head, or with his non-shooting hand. In addition, if that were the case, then there would also be a lack of gun powder burns on the hands according to the autopsy.

Even more bizarrely, an almost identical event took place just over one year earlier, November 2013 in Limoges, when the number 3 ranked SRPJ officer had killed himself in similar circumstances, with his weapon in the police hotel. Allegedly, his colleague discovered his body. The prosecution ruled that case was a suicide too, and the police officer had left a suicide note to his family in which he expressed “personal reasons” for his surprising action.

Stay tuned for more updates on this story at 21WIRE.

Police commissioner, who had been investigating the attack on the Charlie Hebdo magazine committed suicide with his service gun on Thursday night.

Police commissioner Helric Fredou, who had been investigating the attack on the French weekly satirical magazine Charlie Hebdo, committed suicide in his office. The incident occurred in Limoges, the administrative capital of the Limousin region in west-central France, on Thursday night, local media France 3 reports.

Helric Fredou, 45, suffered from ‘depression’ and experienced ‘burn out’ [according to the official statement]. Shortly before committing suicide, he met with the family of a victim of the Charlie Hebdo attack and killed himself preparing the report.

Fredou began his career in 1997 as a police officer at the regional office of the judicial police of Versailles. Later he returned to Limoges, his hometown. Since 2012 he had been the deputy director of the regional police service.

“We are all shocked. Nobody was ready for such developments”, a representative of the local police union told reporters.

On January 7, 2015, two gunmen burst into the editorial office of Charlie Hebdo magazine, known for issuing cartoons, ridiculing Islam. The [suspected] attackers, later identified as brothers Said and Cherif Kouachi, killed 12 people and injured 11, and escaped from the scene. Following two days of nationwide manhunt, the suspects were killed on Friday by Frenchpolice some 20 miles northeast of Paris.