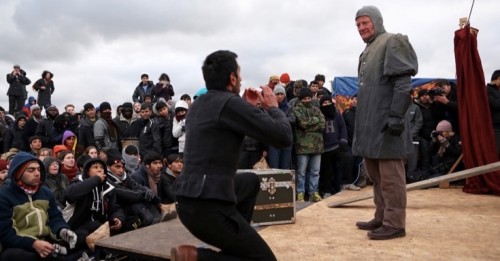 The conditions in which refugees live in various camps around Europe go from uncomfortable to inhumane. The greatest refugee crisis that the world has seen since WW2 has the immediate effect of millions of people arriving to places unfit to welcome them. One great example of such a condition is a well known camp just outside of Paris, France, in the low-income area called Calais. This camp, known as the Jungle, is a site of uprisings, protests and misery. Knowing this, the Globe Theatre group, a theatrical group bases in the UK which continues the legacy of William Shakespeare, decided to go abroad for a specific kind of play. They arranged to arrive in the Jungle, put up a small stage, and gave a performance only for the refugees. “To be, or not to be”. This is one of the most well-known phrases in Shakespeare’s work, found in the play of “Hamlet“. This is the phrase that hundreds of people heard in the play in the Jungle and were transported elsewhere. This performance offered some moments away from their problems for the people living in awful conditions in Calais, even if it wasn’t enough to change their lives. This performance was a part of the Globe Theatre’s project to take the “Hamlet” play to every single country in the world, before returning to the renovated original Globe Theatre in London, where most of Shakespeare’s plays where performed for the first time. The group’s goal is to present the play to the most diverse of audiences, many of whom wouldn’t otherwise have easy access to watching it. The refugees in Calais is exaclty an audience like this.