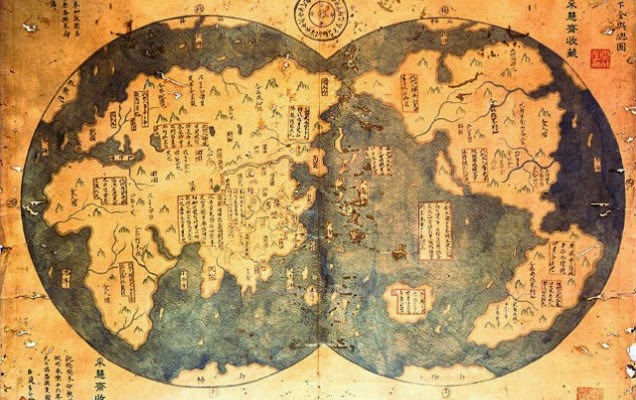 Christopher Columbus is heralded as the discoverer of North America, which is an idea that can be argued against in so many ways it boggles my mind. Can you really be considered the discoverer of a place that already has millions of human inhabitants? Either way, new research shows that the Chinese were present in North America 70 years before Columbus would accidentally stumble upon it.

Gavin Menzies, a historian considered controversial for not adopting the mainstream school of thought about America’s discovery, claims that this map from 1418 proves that China’s Admiral Zheng discovered America decades before Columbus.

In his book, Menzies claims that his map was found in a used book store by Liu Gang in Beijing. As reported in the Daily Mail:
“The document, he says, is an 18th century copy of Admiral Zheng He’s 1417 map. Mr Menzies argues that it clearly shows North American rivers and coasts, as well as the continent of South America.

Mr Menzie’s assertion about Zheng He’s voyage to the New World isn’t new – he first wrote about it in 2002 – but the map is.

Mr Liu had the map authenticated by an appraiser from Christie’s Auctions, who said that the document was ‘very old’ and was not a newly-made fake.

After Mr Liu brought the map forward, Menzies also had a team of historians analyze every word on it. He concluded that it was originally written in the Ming Dynasty – a Chinese period that lasted from 1368 to 1644.” 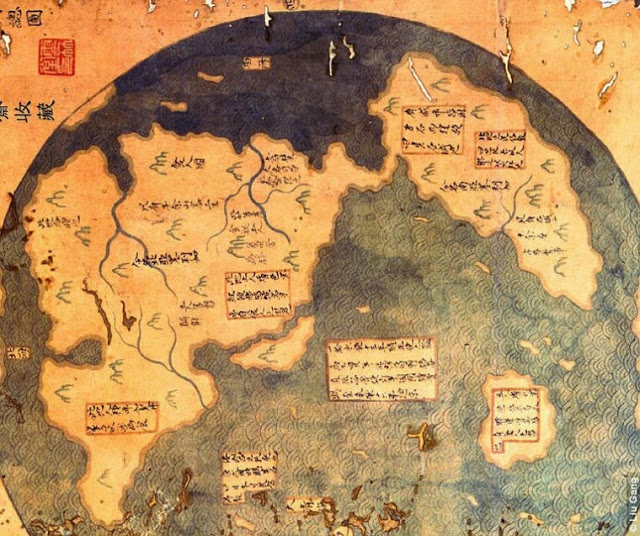 The map features some unique perspective:

“If you just go out in a plastic bath tub, the currents will just carry you there. They just came with the current, it’s as simple as that,” says Menzes.

If you like this post, you should like also the Piri Reis map, a genuine document that was re-made (copied from older documents) at Constantinople in AD 1513, and discovered in 1929. It focuses on the western coast of Africa, the eastern coast of South America, and the northern coast of Antarctica. Learn more, here.