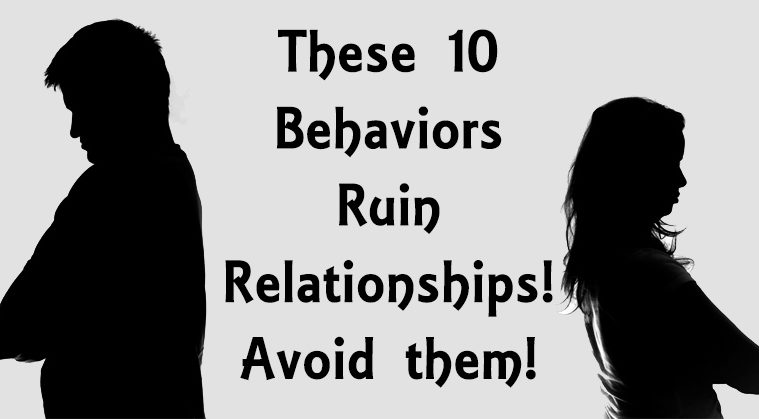 Ahhh, a new relationship. When you’re first getting to know each other, you love each other’s little quirks and you can’t go a day without spending time together… The beginning of a relationship is great, isn’t it? Two people can be in complete bliss… Then somewhere down the road, a few weeks, months or even years later, something happens, leaving you scratching your head in confusion. What went wrong? If this has happened to you in the past, here are ten common behaviors that ruin relationships, and how to avoid them in the future:

1. Acting Single
Acting like you’re single shows that you don’t have respect for your partner. If you’d rather go out without checking in, or constantly make plans with other friends without involving your significant other or keep things from your partner, maybe it’s because you’d rather be single. Being in a successful relationship requires commitment and accountability.

Why Men And Women Think Differently. This Guy Nails It.

2. Being Financially Irresponsible
If you and your partner share a bank account, spending money without thinking about the other person can lead to arguments, broken trust and eventually, a break-up. Sharing finances means you have a responsibility to your partner to spend money wisely and to consult with them before making any large purchases.

3. Having No Other Interests<
Being able to spend time alone with your hobbies and interests is important in a healthy relationship. If you and your partner are constantly together, you won’t be able to have your own life, friends, interests, hobbies and alone time. Being too dependent on your significant other can deprive you of living your own life.

4. Being Insecure
Insecurity is a common problem, but it can lead to the demise of a relationship. Insecurity can cause jealousy, create trust issues and turn into a reoccurring theme in arguments. Without trust, a relationship can’t last, so you have to find a way to work through your insecurities.

5. Being Disrespectful
Rolling your eyes, being sarcastic and having no regard for your partner’s feelings are all forms of disrespect. When disrespectful behavior escalates, someone is bound to get hurt. Finding humor in tough situations can be helpful, but constantly poking fun at your partner can be hurtful.

How to Forgive Yourself.

6. Showing a Lack of Affection
Relationships can fall into a rut. Romance can fizzle out and the magic can disappear. When you see that start to happen, going out of your way to show affection is the best way to rekindle the fire. If you wait too long, it might be too late.

7. Being on Your Phone
Social media is huge these days, and it’s also caused an end to many relationships. Texting or being on your phone instead of communicating with your partner shows a complete lack of interest. Put the phones away when you go out to eat, watch a movie, or whenever you’re spending time together.

8. Being Dishonest
Dishonesty is a relationship killer. If you can’t be honest with your partner, then you don’t belong in that relationship. If you are the one being dishonest, find a way to break the cycle before your relationship suffers. If you’re constantly being lied to, it’s probably time to move on.

9. Behaving Compulsively
Compulsive behaviors are red flags when it comes to relationships. When a person is unhappy, they tend to reach for something else. Over-indulging in food, alcohol, shopping or any other vice is a sign that something is off, and a much-needed conversation is in order.

10. Nagging
Contrary to popular belief, nagging isn’t the fault of only one person in the relationship. Nagging occurs when one person repeatedly makes a request, the other person ignores it, and both become increasingly annoyed. The best way to end nagging is to address the issue. Both partners need to work to eliminate it from the relationship.