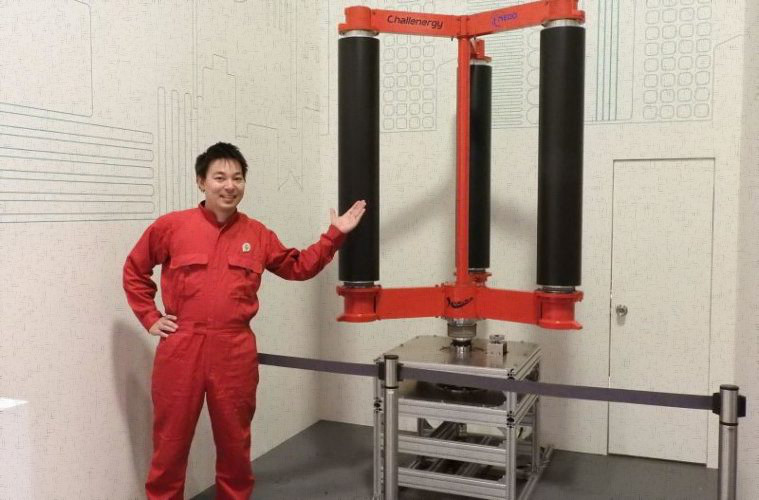 It would be an understatement to say that typhoons aren’t typically associated with something positive. In the natural world, they cause mass destruction, wiping out entire communities and leaving many bodies in their wake. But a Japanese engineer has constructed a wind turbine capable of harnessing the immense power of these storms in order to turn it into useful energy. If his project is successful, a single typhoon would have the ability to power Japan for 50 years.

“Typhoons are normally nothing but a disaster,” noted Atsushi Shimizu, the inventor of the world’s first typhoon turbine. Japan is no stranger to the destruction of typhoons. In fact, the country has already seen six typhoons in 2016 alone.

Shimizu’s highly durable eggbeater-shaped device was constructed to counteract Japan’s energy shortage, which has been an issue since the Fukushima disaster back in 2011. “Japan actually has a lot more wind power than it does solar power, it’s just not utilized,” Shimizu said.

Shimizu, the founder of green tech firm Challenergy, says Japan could be “a superpower of wind.”

Above he is showing off a model of his typhoon turbine. (Image: Challenergy)

Before the Fukushima disaster, it was expected that nuclear power would
account for 60% of Japan’s primary energy by 2100, but the earthquake and tsunami that killed 19,000 people also resulted in three nuclear breakdowns, putting that plan entirely off track. Today, with much of its nuclear reactors inactive, Japan imports roughly 84% of its energy requirements.
“For decades, Japan has brought in European-style wind turbines, not designed for typhoon zones, and installed them with no careful consideration — they’ve broken almost entirely,” explains Shimizu. Back in 2013, during Typhoon Usagi, eight turbines collapsed at China’s Honghaiwan wind farm, in eastern Guangdong, while an additional eight were reportedly damaged. Such unsuccessful efforts have led the Japanese government to focus on solar power, with many urban homes now incorporating solar panels. But Shimizu believes in the potential of Japan’s untapped wind power.
Shimizu’s typhoon turbine is unlike conventional turbines in that it works on an omnidirectional axis to allow for the machine to withstand unpredictable wind patterns. The speed of the blades can be adjusted to prevent them from spinning out of control when a storm hits. Called the Magnus effect — the sideways force that makes a spinning object stray from a straight path — it offers an astonishing amount of control over the turbine’s blades. Engineers can adjust the speed of the blades by simply tightening the centre rod.
A prototype, which has been tested, showed 30% efficiency — 10% lower than propeller-based turbines. However, the big difference to make note of is that Shimizu’s turbines are capable of surviving an actual storm.
In 2013, Shimizu quit his job and founded Challenergy, after which he won funding to invent his wind turbine. Earlier this summer, the functional prototype was installed near Okinawa. Now, the device must be tested under high-wind conditions to see if it holds up to Shimizu’s expectations.
It’s not completely known where all the incoming energy will be directed, however. Will it go right back to the grid? Or will it be stored in large batteries? Nevertheless, while questions remain and outcomes have yet to be seen, the idea is nothing short of groundbreaking.
Credits: Collective-Evolution.
Comments (1)