The deadliest drug in America is legal in all 50 states, and it’s significantly more dangerous than a range of illegal substances much more heavily regulated and policed.According to research recently published in Scientific Reports and spotted by the Washington Post, alcohol is approximately 114 times more dangerous than marijuana, which remains the only federally controlled substance that has never caused a death by overdose. The authors of the study assessed the “comparative risk” of death that accompanies consuming everything from weed to meth and heroin — and found that marijuana is even safer, relative to those harder drugs, than they previously believed.

Researchers drew these conclusions based on something called “margin of exposure,” which measures the likelihood of an average user accidentally ingesting a toxic dose. The lower the ratio, the smaller the margin for error, and the easier it is to consume a harmful dose.

As you can see in the chart below, marijuana’s average margin for error — represented by the red bar — is much higher than that of other drugs, meaning the likelihood of consuming a harmful dose is lower. The margin for error for alcohol, meanwhile, is very low, reflecting a much higher risk of harmful consumption. The greatest threat to your personal health is on tap tonight at the local bar: 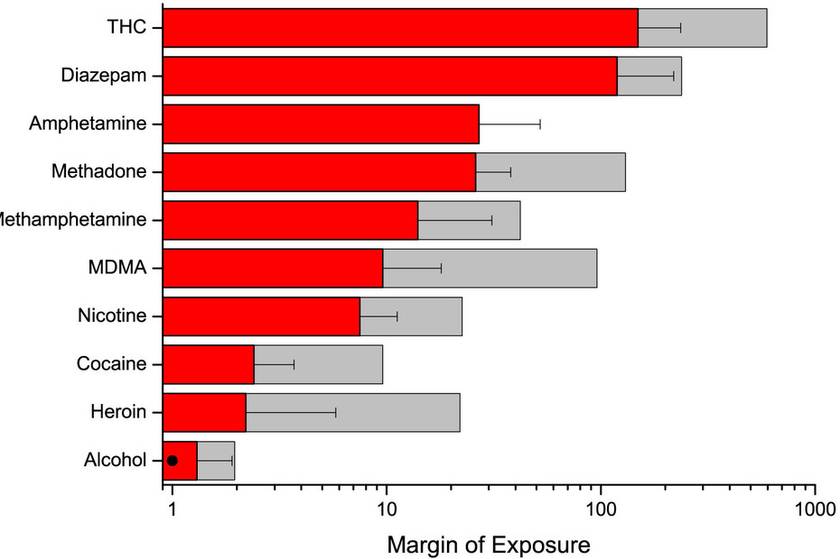 Under the Controlled Substances Act of 1970, marijuana, which researchers found to be the safest of the drugs tested, is ranked alongside Schedule I designees heroin, Ecstasy and LSD. By the letter of the law, that would suggest that cannabis has “the high potential for abuse,” no medicinal value and no accepted means for being ingested safely under a doctor’s supervision. Marijuana, as studies over the course of a decade have continually found, defies all three qualifications.

Ignoring the real threat: To give you an idea of how baffling federal drug law is, consider that two of the four most deadly substances — alcohol and tobacco — are lightly regulated and available at most grocers and corner shops. Cocaine is lumped in with theoretically less dangerous Schedule II drugs in part because dentists, in a practice mostly abandoned at the end of the 19th century, once used it as a topical numbing agent. From that, the law derives that cocaine has a “currently accepted medical use in treatment in the United States.”

Heroin is the second deadliest substance, trailing only alcohol in the Scientific Reports study, but the drugs most likely to create a taste for it — Percocet, Vicodin and OxyContin, to name a few — are being prescribed by physicians at a staggering rate. Researchers at George Washington University found that “between 2001 and 2010, the percentage of overall emergency department visits where an opioid analgesic was prescribed increased from 20.8% to 31%” and that prescription rates for “Dilaudid, one of the most potent yet addictive medications, went up 668.2%.”

Not that any of this should come as news to lawmakers. The government’s Centers for Disease Control and Prevention study of drug mortality rates — which tallied confirmed causes of death rather than assessing more subjective dangers — puts a fine point on how obviously backward U.S. drug law has become: 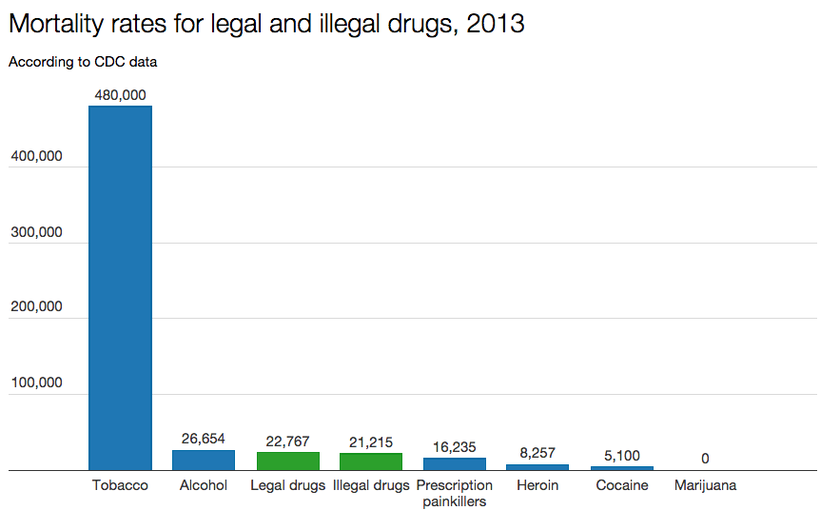 Blame Congress: Despite the considerable evidence showing marijuana’s relative harmlessness, especially compared to other banned drugs, officials in the federal government have shown little interest in fitting the laws to match the science. In passing its most recent spending bill, Congress even managed to insert a rider blocking the enactment of a new, voter-approved law in Washington, D.C.

On the state level, the news has been more encouraging. Four states and D.C. have legalized marijuana for recreational use, while 18 more have decriminalized it. Twenty-three now have allowances for doctor-prescribed medical use. Advocates told Politico in December that they are planning to launch a series of new ballot initiatives ahead of the 2016 elections, when turnout among younger voters is expected to be higher than for last year’s midterms.

High time for a change: As Mic’s Tom McKay wrote earlier this month, despite U.S. drug policy being “arbitrary, harsh and ineffective all at the same time,” there is little financial incentive for serious reform — which stings, because the social and medical science is increasingly clear.

Based on experiments gone right in other countries — most notably Portugal, which decriminalized everything from weed to heroin — America’s decades-long “war on drugs” looks more and more like the stubborn relic of a bygone era. Today, as states like Colorado begin to see the positive effects of marijuana legalization, the rationale for sticking by laws crafted by Richard Nixon’s White House is looking increasingly thin.