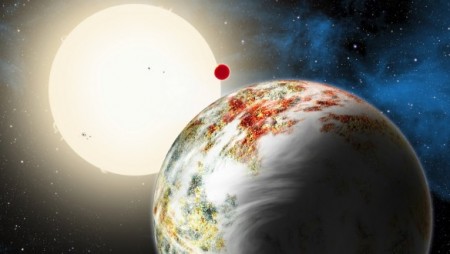 The announcement of the detection of a rocky planet that weighs 17 times as Earth did today astronomers of Harvard observatory within a conference of the American Society of Astronomy.

This discovery was not expected from the theory of planet formation was considered as certain that such a large planet would attract around hydrogen and become a gas giant with a rocky core , such as Jupiter.

But since this particular planet is solid and much bigger than the mega – Earths , as they are called the rocky planets are larger Earth is the first planet that is among a new class of mega – Land.

Kepler 10c detected data from the Kepler space telescope and is in orbit around a star similar in size to the Sun , and takes 45 days for a complete circuit around it. It is located 560 light-years away from Earth in the constellation Draco , while at the same planetary system lies another rocky planet , Kepler 10b with three times the mass of Earth but which is an igneous world needed only 10 hours to perform one rotation around its star. Instead, the Kepler 10c presents kinder properties as to the likelihood of developing life according to the researchers.

Having a diameter of 29,000 km , about 2.5 times greater than that of Earth , Kepler 10c initially categorized as small – Neptune. But when later using the TNG telescope in the Canary Islands , astronomers measured the mass and found that it does not consist primarily of gases were surprised as theories of planet formation are not doing well to explain such a phenomenon.

The planet is likely to have the atmosphere in the past and lost it at some stage of its development , he is more than enough mass to maintain and so they all show that Kepler 10c born so sometime before about 10 billion years , ie relatively early in the history of the Universe.

Although this discovery begets theoretical questions , scientists believe that they will discover other planets will be included in the mega – Earths , while a further conclusion that emerges is that in the search for planets similar to the Earth should be included even more old stars.