Home » Negative Thoughts Can Rot an Apple Faster – Imagine What They Can Do To Your Body.

Thoughts shape how our lives will turn out to be. That’s not something new. We know this, and we have experienced it probably. Negative thoughts have just made us see the bad in everything, even where no bad existed. It’s like a self-created disease – and we have the power to change it. 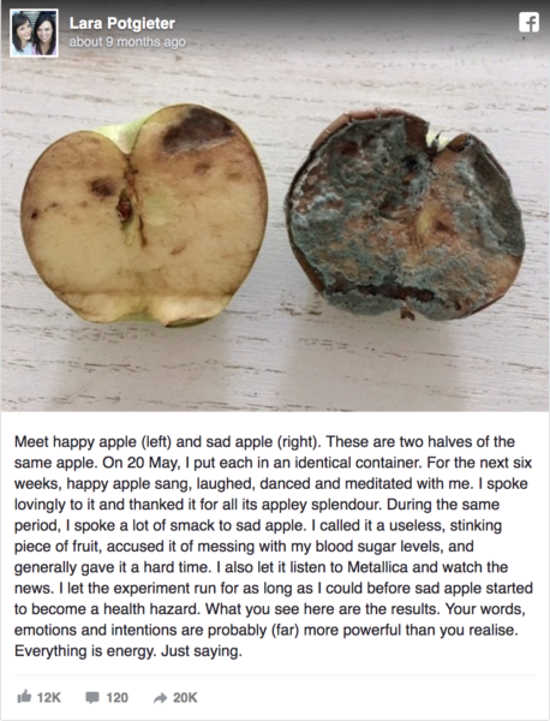 Sometimes, we need validation from outside, something to tell us how harmful thoughts can be. That’s what the Documentary ‘What the Bleep do we know?’ did for me. It showcased how thoughts can define our perception of the world. Even the infamous experiment of Masaru Emoto, ‘Secret Life of Water’ brings up similar results. Different thoughts were directed at different water containers and what was observed? The molecules of water which were provided with messages of ‘love’ and ‘care’ made beautiful geometric patterns under a microscope, while the one fed with messages of hate like ‘I hope you die’ looked chaotic. So could you imagine how powerful thoughts can be to our living brains!

Creative energy can help or hinder

The Facebook post by Lara Potgieter again demonstrates the same – this time with an apple. But Lara changed certain things with her experiment. She kept the apple halves in two identical containers and used creative energy. For one half, she used art, meditation, praise and gratitude. The other half did not get such a positive treatment. It was offered mainstream news, and metallic songs, and an occasional dose of hate and judgment – all kinds of fear-inducing elements. And the results: it’s as striking as was found in the water experiment. The happy apple rot slowly but the other half had rotted fast and completely. 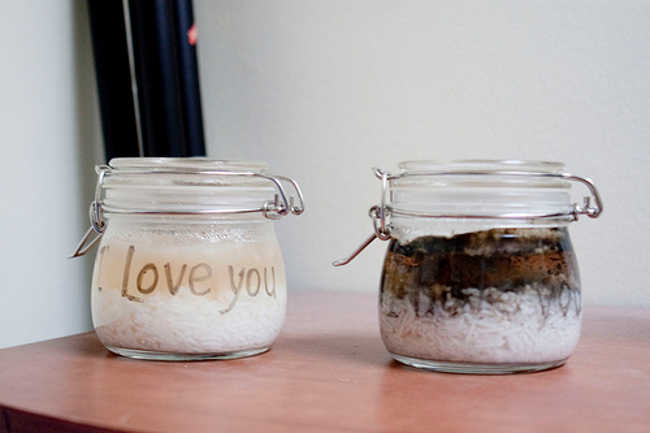 Makes you wonder how important thoughts are, right? Yes, it’s time we think about what we are thinking. Meditation, creativity and positive thoughts will keep us healthy and amazing. But are we doing that or are we playing the victim and finding negative reactions in everything? It has made me wonder about the animal products that we eat. Most of them live in fear, pumped with antibiotics, kept in harsh conditions – how much toxicity is present in it? Same goes for the plants being imported – they come in such a cramped space, exposed to radiation and chemicals and other negative elements. It really makes me wonder whether we are eating anything healthy. Nowadays, I’ve made it a point to pray before eating for the food I received– infuse as much positivity as I could.

Even Science back it up

Science backs it up. At UC Irvine back in 1999, a statistics professor published a paper and found out that parapsychological experiments like telepathy and distance healing have had a more positive effect on heart diseases than normal medicines. The results are stronger than the use of anti-platelets. Now, that’s something shocking! More research is being done and if this turns out to be proven – we have to rethink the entire medical system.

Perception is powerful. So, next time, when a colleague is doing everything wrong, don’t get frustrated? Think of it as a learning process and be optimistic. Like the rain which makes the grass green, it’s time we look at the bright side. We don’t want to rot as fast as the apple now, do we?