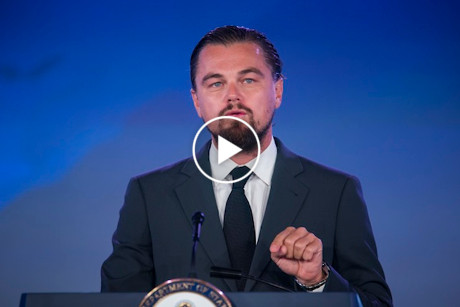 Leonardo DiCaprio was for the first time against the global elite leaders showing it is getting hot in his new role as the Messenger of Peace for climate change issues.

In his speech at the UN Summit on Climate American Hollywood star reminded the leaders of the international community that “climate change is the greatest challenge of our very existence on the planet.” Leonardo DiCaprio stated in his career as an actor saying he has learned to separate fiction from fact. “Play fictional heroes solve imaginary problems,” he said and continued: “I believe that the world is facing climate change with the same logic.

Pretending the problem does not exist and that will solve so alone. I think we all know that this is not the case today … Climate change is not a rhetoric … not even a hysteria.

It is a fact. “Note that Leonardo DiCaprio participated Sunday in the grand march held in New York to raise awareness towards the problem of climate change.