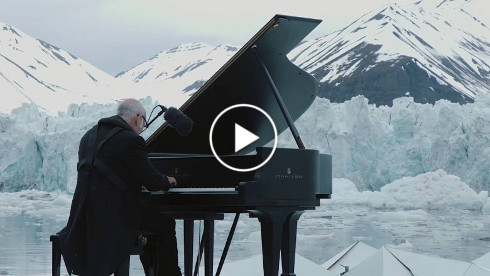 The Italian pianist Ludovico Einaudi trained alongside composer Luciano Berio in the early 1980s and soon began to incorporate in the compositions of different genres and styles such as pop, rock, folk and world music.

Einaudi became known to a wide audience, from the songs of which were included in the soundtracks of recent films Intouchables, I’m Still Here, Doctor Zhivago and Acquario (where he won the Grolla D’oro for Best Soundtrack).

The internationally acclaimed Italian pianist Ludovico Einaudi gave the most special concert of his life, in the middle of the Arctic Ocean.

The famous composer from Italy played his piano composition “Elegy for the Arctic“, contributing to the promotion of the global Greenpeace campaign “Save the Artic“.

See the amazing video below.