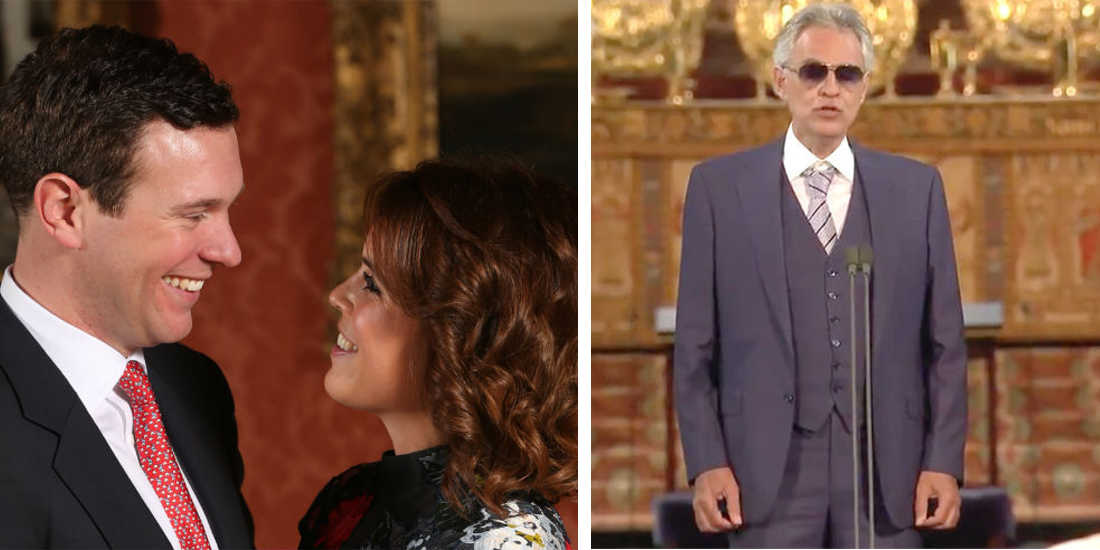 The wedding of Jack Brooksbank to Princess Eugenie took place on the 12th of October in the most royal way possible. The location, her outfit and the music served to make it a memorable wedding and even if you weren’t one of the few to be awake at 6 AM to watch the live stream of her wedding, you shouldn’t miss the opportunity to listen to Andrea Bocelli.

A performer and writer who is renowned internationally for ‘Ave Maria’ and ‘Panis Angelicus’. Andrea Bocelli’s performance accompanied by the Royal Philharmonic Orchestra before all the guests at the wedding in Windsor Castle were mind-blowing. Luckily, recordings of his performance are on Twitter for those of us who couldn’t attend or couldn’t watch the live stream. Just ensure that you’ve got a couple of hankies so you can get through it.

A journalist at the event retweeted his absolutely mesmerizing rendition of Ave Maria. Bocelli’s performance of Panis Angelicus was actually posted on Twitter by the Royal Family’s official account.

The press revealed his appearance at the wedding. At the same release, Princess Eugenie and Jack Brooksbank also told the world that the Royal Philharmonics Orchestra will play music for their wedding. The Director of the Orchestra, James Williams, was all praises when it came to the event.

According to Williams, it was a good experience on the whole, including the time they spent planning the music for the wedding with the Princess and her groom. The whole orchestra wishes a very happy married life for the happy couple.

As for Andrea Bocelli, he’s quite used to putting up a performance for VIPs. After putting up a performance for the Pope, Bocelli is one of the few who has been requested to perform at the marriages of the royals. He is now on par with Elton John and Karen Gibson who sang at Prince Harry’s wedding to Meghan Markel. For the Duke and Duchess of Cambridge, it was Ellie Goulding.

Seemingly very happy at being there. Bocelli smiles for a picture along with his family who also attended the wedding.

Today at Windsor Castle for Eugenie and Jack #RoyalWedding. pic.twitter.com/bQK20JiCE2

It was a beautiful day for the Princess and her husband as well as for Bocelli who made the day extra special. His mesmerizing performance invokes a series of emotions that will stay with viewers long after they’ve finished watching it.