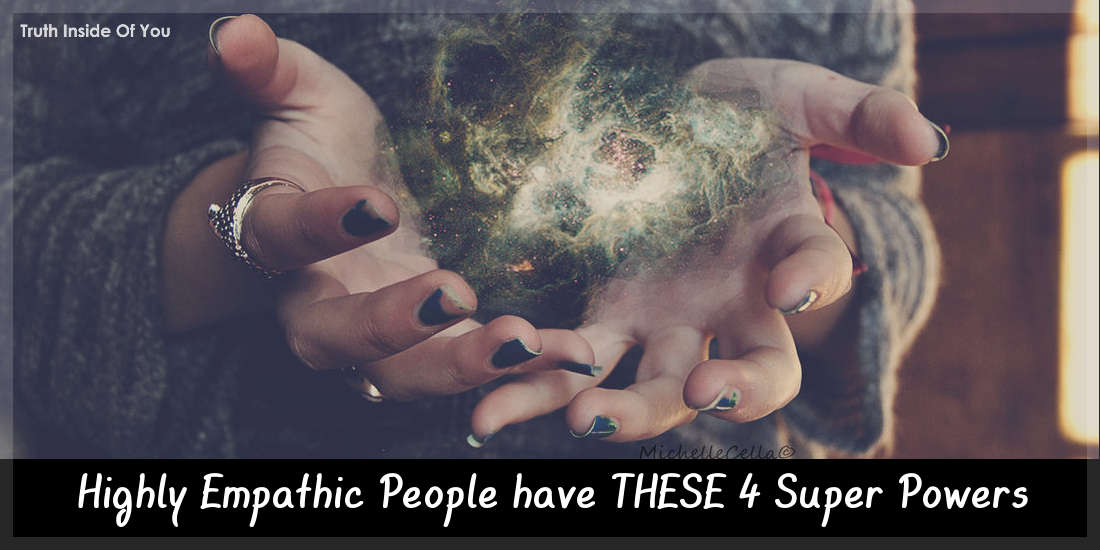 A highly empathic people is a special person indeed. They can sense emotions and energies unlike no other. Sometimes they feel these emotions so strongly that they think they’re a curse to society. But they’re no curse. In fact, most of them have a certain degree of psychic ability.

I would even venture out to say that empaths have superhuman abilities, powers to do the seemingly impossible. Here are 4 of those powers.

Mind reading is one of the things that empaths do well. We can all read minds to some degree, but not so much as the empath. Our normal mind reading consists of paying attention to body language or monitoring non-verbal communication. The empath can truly know thoughts without paying much attention to gestures.

15 Things You’ll Notice When You’re In The Presence of an Empath.

Empaths pick up on sounds, images and other things that indicate to them that something important is being relayed. When they focus on these indicators, they can build an even stronger link with their psychic abilities. So, if you’re an empath, embrace these gifts.

2) Empaths can live as their own superhero.

This can come from being in touch with their own emotions. There are plenty of times, following negative statements from friends, that you could return even more negative input, but you don’t.

Since you are in touch with your feelings, you can find a way to respond in a loving yet strong manner and guide the conversation in a whole new direction. It takes patience, practice and a fortified will to transform the way you communicate with others.

If something negative happened moments before an empath entered the room, the empath will feel it. It’s a two-step power as the empath can both sense this negative energy and they can transform it into something positive.

All it takes is a little humor, added to any given situation, to transform a negative conversation into something quite pleasant. You can tell jokes, tell good news or just be silly. If you are an empath, you will also know what to do to make the transformation work.

4) Your sensitivity is needed by others so instead of feeling down about all your complaining and pickiness, use these differences to improve the world.

Maybe you can’t eat certain foods because you are gluten intolerant. Well, take this weakness and learn to cook gluten-free meals for others like yourself.

Limitations do not necessarily mean weaknesses, they can also reflect nature’s way of recruiting you to help others improve their lives.

So never think being an empath is a cure because it’s not. Being an empath means being unique and being proud of that great and rare quality. Pay attention to what you can do as an empath. Maybe you have superpowers too. 🙂