In November, voters in as many as 12 states will see a marijuana legalization initiative on their ballots. Marijuana is already legal for recreational use in Alaska, Colorado, Oregon, Washington and Washington, D.C. Another 25 states have legalized medical marijuana. The era of marijuana prohibition is rapidly coming to a close.

In a recent article, I argue that the agricultural sector of the marijuana industry also presents a number of challenges. One paramount question looms over the rest: Will marijuana agriculture become consolidated, with “Big Marijuana” companies producing vast quantities of indistinct marijuana? Or, will small-scale farmers thrive by producing unique and local marijuana strains?

My research shows that Big Marijuana is not inevitable. On the contrary, a local, sustainable, small-scale farming future is entirely within reach.

The problem with Big Marijuana

Marijuana agriculture in the United States is currently dominated by small-scale farmers. Staying small allows farmers to stay under the radar of federal officials. When the federal prohibition is lifted, however, many people assume the free market will push these farmers out of business. As large farms producing cheap marijuana drive prices down, small-scale farming may no longer be profitable.

As one recent study put it, “legalizing marijuana opens the market to major corporations, including tobacco companies, which have the financial resources, product design technology … marketing muscle, and political clout to transform the marijuana market.”

But there is a reason to doubt the inevitability of Big Marijuana. To begin with, it’s not clear the marijuana plant is capable of large-scale cultivation. “Marijuana” is a catch-all term for the hundreds of individual strains of the Cannabis sativa plant species. Each strain has unique cultivation needs and yields a product with unique characteristics. Marijuana farmers have told me that many of these strains are notoriously high-maintenance. It would be difficult to mass-produce these strains without a noticeable drop in quality.

There’s little reason to believe marijuana agriculture will operate in a completely free-market environment, either. Many states are wary of letting big corporations take over the marijuana industry. California’s Blue Ribbon Commission on Marijuana Policy recommends “a highly regulated market … not an unregulated free market; this industry should not be California’s next Gold Rush.”

And, “the goal should be to prevent the growth of a large, corporate marijuana industry dominated by a small number of players.” Some states have already taken measures to protect small-scale farmers, and prevent a Big Marijuana takeover. California, for example, limits the maximum canopy size of a marijuana farm to one acre, which is minuscule compared to most American farm crops. Many people might be uncomfortable with the mainstreaming of marijuana, but spreading the opportunities and benefits to many, rather than a powerful few, might make it easier for politicians and their constituents to make peace with legalization.

Parallels between wine and weed

If a local, sustainable, small-scale vision of marijuana agriculture is possible, how can it be made a reality?

I argue that farmers, regulators and consumers may benefit from adopting the wine industry’s organizational model, known as the appellation system. An appellation is a legally protected designation that is applied to a product to indicate the geographic region where it was created.

For example, when a wine label says the wine comes from Napa County, you can be confident it actually did. Some appellations – in Europe, for example – also enforce quality standards or cultivation methods. Under U.S. law, wine appellations typically speak only to the place of origin, but in theory, an appellation system can do much more. In the U.S., appellations can take the form of a micro-region, county, state, or group of states. There are 236 active wine appellations in the United States today. 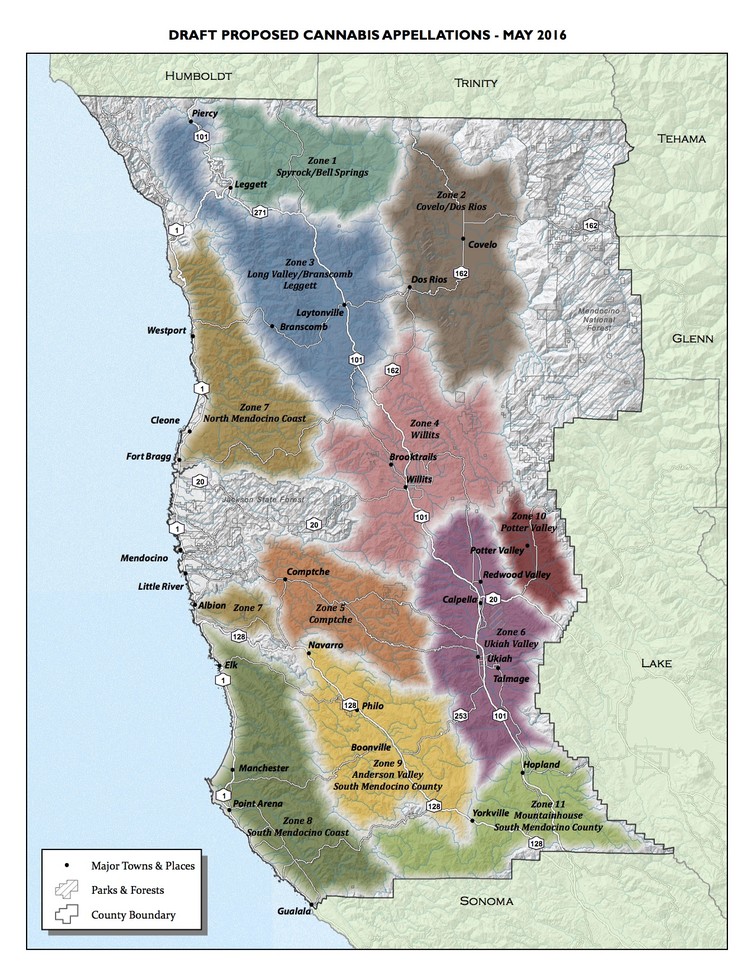 Appellations can add value to the marijuana industry in several ways. Appellations provide a legally protected designation of origin, differentiating local products from generic products. That helps protect local farmers and farming communities from the threat of cheap marijuana flooding the market because the products are no longer the same. Some appellations, like those in Europe, can also encourage farmers in each region to work out issues together by setting rules and standards for cultivation that maintain the product’s quality and reputation. Also, as in the wine industry, appellations may promote agrotourism in marijuana farming communities.

In the image above, for example, micro-regions of Mendocino County, California, have been proposed as cannabis cultivation appellations. Farmers hope these designations will promote tourism and enhance their brand.

For the consumer, designations of origin provide transparency and protection. In the prohibition era, most marijuana transactions took place on the street. Consumers typically had no idea where their marijuana came from. Chances were good it came from Mexican cartels. But now that American farmers are supplying consumers with quality marijuana, a certified designation of origin would provide some measure of transparency by relaying important information to the consumer. By keeping unique products in the marketplace, appellations also provide consumers with more options to suit their medicinal or recreational needs.

Marijuana appellations are not a panacea, and it will be challenging to implement and enforce “cannabicultural” designations of origin nationwide as long as a federal marijuana prohibition is in place. But at a time when lawmakers are scrambling to put regulations in place, appellations may provide the organizational structure needed to make sure marijuana agriculture remains safe and sustainable.