Home » A Rabbi, a Priest And An Atheist Smoke Weed Together And Talk

We have all heard jokes about a rabbi, a priest and an atheist walking into a bar. But what happens when you cut back on alcohol and add some weed into the equation? Yes, it’s high time someone uses that punchline. A video from Cut has done just that. The video has brought together two holy men and a single atheist to they smoke weed together and spark up their metaphysical discussion. 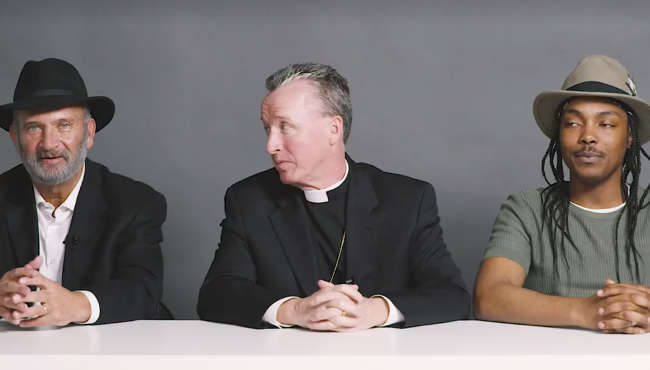 Filmed in Washington state where recreational marijuana is legal, the video features an Episcopal priest Reverend Chris Schuller, Rabbi Jim Mirel, and Carlos Dillard, a self-labeled atheist, sitting together and smoking some good weed as they discuss religion, the existence of god and of course, what the holy books say about weed.

While both the holy men admitted trying weed years back and have been out of it for years, Carlos blatantly admits the last time he had weed for just an hour ago! Regarding weed, the Reverend makes one thing clear – most people identifying as Christians will not be in favor of smoking weed, but also states that the Bible has no precedent allowing or forbidding smoking of weed.

Rabbi Jim Mirel adds his own knowledge on Bible studies and presumes that many mythical experiences of the people in the Bible may have been under the influence of some mind-altering substance. On top of that, he hints that the anointing oil mentioned in Exodus had the power to elevate people, and it may just have hemp as one of its components. That’s one new thing that we learn today!

When there’s the first hit 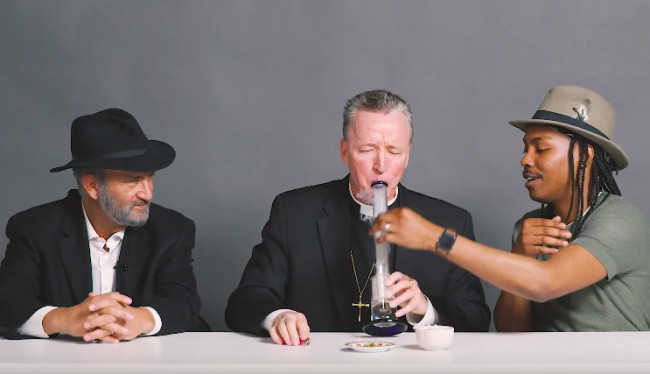 The group uses a bong and the experienced Carlos guides the priests through the mechanism. With the first hit, they switch to joints and Carlos is just happy to tick off ‘smokin’ with some priests’ from his bucket list.

The conversation begins with retrospection. Carlos admits that he grew up really religious but he no longer believes in anything. But he adds that no one could deny someone brilliant did this, sparking up the debate. Carlos turns out to be spiritual or agnostic instead of an atheist.

Reverend Schuller comes in and says that all stories boil down to the same thing regarding the existence of God. Carlos refutes him saying that there are no stories. Science, for him, has erased any need for religion. For Carlos, religion is like astrology – a way of human understanding. He really goes deep this time!

Was there a common ground? 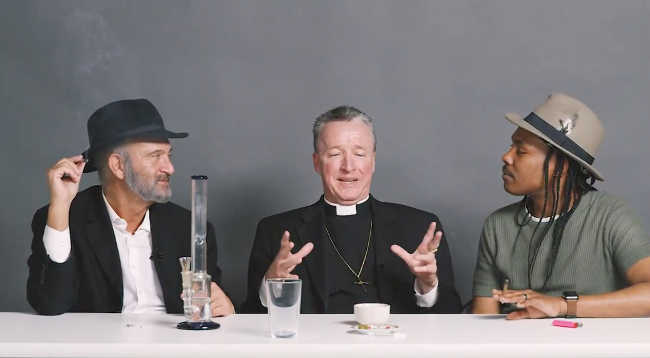 The group does find common ground regarding the existence of life outside earth. For Rabbi Mirel, there’s a complete mathematical possibility of life to exist outside earth. No disagreements there! Eventually, they talk about the legalization of weed and all men agree. Reverend Schuller believes marijuana should be legalized and monitored in the same way as alcohol is. For Rabbi Mirel, if marijuana gives a positive experience to people then it’s a good thing. The experienced Carlos comes up with an interesting saying – ‘God made dirt, dirt doesn’t hurt, God made weed, weed doesn’t make you bleed’.  That says it all!

In the end, the Reverend remembers that its Ash Wednesday and Carlos allows him to put a cross of ash on his forehead. Carlos returns the favor. The Rabbi joins in and contributes his blessing to both his new friends.

So, what happens when a priest, a rabbi, and an atheist sit together and smoke weed? They come out being good friends.