The life of Jesus is a subject of unending curiosity. There is no record of any kind of his life from the ages 13 to 29, and therefore these years are known as ‘the lost years’. Until a discovery, that was backed pretty well too, came up in 1887.

Nicholas Notovitch, a Russian doctor traveled across India, Afghanistan, and Tibet in the 19th century pretty extensively. It was during this trip when he broke his leg and took shelter in the Buddhist monastery of Hemis in Leh, which is in India. He was shown documents and papers that held in the stories of a child named Issa (which means child of God) and was called The Life of Saint Issa.

These documents say that Issa was born to a poor family in Israel back in the first century. The monks who taught him the sacred Buddhist texts called him the ‘Son of God’, which is Issa. In some texts, he is known as “Issa Masih”.

Taking from these documents, Nicholas published a book in 1887, titled, “The Unknown Life of Christ”. The strongest and the most credible part of this all is the timeline is exact. These documents coincide with “the lost years.”

Husband’s Sketches Of Wife And Kids Are Full Of Love And Raw Emotion. 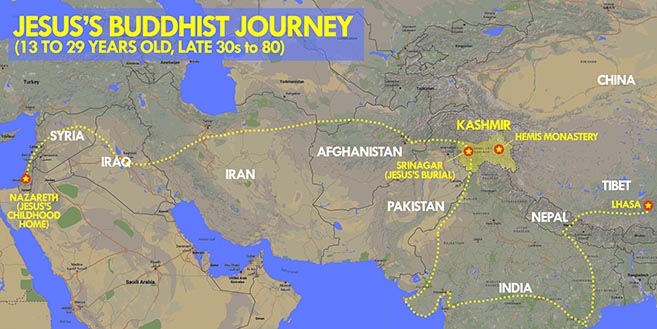 These documents tell us that Jesus did not spend all his time at the monastery either. He also roamed around spreading knowledge. Jesus is believed to have been greatly inspired by the Buddhist texts. He moved around in Puri, Benares, and Rajagriha to teach Buddhism but was chased out by the Brahmins. After that, he fled back to the Himalayas to continue his study of Buddhism.

Holger Kersten, a German Scholar also published a book titled “Jesus Lived in India”, in which he claims that he moved around Punjab, the land of five rivers and had arrived with merchants in Sindh before he found his way to the Himalayas.

There is a BBC produced documentary called “Jesus was a Buddhist Monk”. It tells the story of how he had managed to flee his crucifixion and had gone back to the place where he had basically grown up and spent the rest of his life in Kashmir, while sometimes visiting the neighboring areas of Tibet.

The documentary shows that he lived a long life.