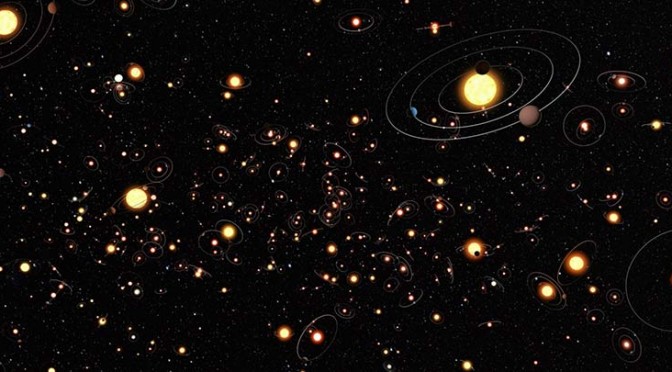 We all know that there are an incredibly massive amount of stars in the universe, and we also know that in that incredibly massive number, there must be at least a couple planets around each one, making the number of planets to stars like the difference between the number of leaves to the number of how many trees there are. Sure, there’s plenty of tree’s without leaves, but there’s even more tree’s with them.So NASA scientists announced recently the discovery of 715 new planets around distant stars, including but not limited to four alien worlds roughly the size of Earth that have very high probabilities of supporting life… and may even support life now.

The discovery, based on two years of data collection on 150,000 or so stars by the orbiting Kepler space telescope, brings the confirmed count of planets outside our solar system to nearly 1,700.

Philosophically, we can know that there is such a gargantuan number of stars out in the universe that it is impossible to measure… perhaps even pointless to. What’s exciting is knowing that now we are actually able to see them, which is the first step to actually going there ourselves one day.

“We have almost doubled the number of planets known to humanity,” said planetary scientist Jack Lissauer at NASA’s Ames Research Center in Mountain View, California – who is a science co-investigator on the $600 million Kepler space telescope mission.

What’s crazy is that all of this data was collected before the Kepler telescope malfunctioned last year, meaning that this is 700 new planets was seen from the time it launched to the time it broke, 2009 to 1013, leaving it unable to track stars precisely enough to continue the planet-hunting mission. How many new stars would it have seen had the malfunction not taken place?

Meanwhile, the researchers continue to pore through data collected while it was still working properly, which document several thousand candidates in the expectation they will be able to confirm the existence of several hundred more planets in orbit around other stars.

Almost all of the newly found exoplanets are smaller than Neptune, which by the way is almost 4 times the size of earth, and they were found in and around about 305 solar systems that we know of today.

The researchers said that four of these newly confirmed planets are less than 2.5 times the size of Earth, which means the force of gravity there would be relatively comfortable for creatures like humans, and orbit in the so-called habitable zone around their stars—the distance at which the surface temperature of an orbiting planet may be right for liquid water. It wouldn’t be so hot that it would boil and dissipate into space or so cold that it would freeze solid.

One of the implications of this discoveries confirms that small planets are extremely common in our galaxy, which means of course the prospects of humans one day moving to other planets to live is rather high. This is rather exciting… We just have to get our sh*t together here first, before moving onto another planet… wouldn’t you agree?