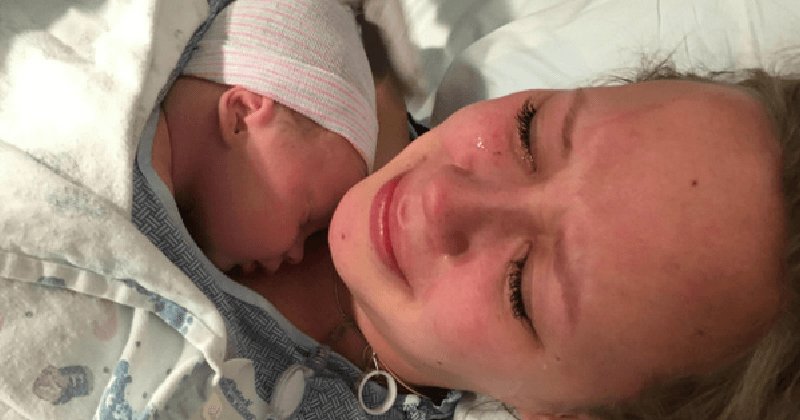 3 in 10 teen girls get pregnant at least once before age 20. That’s nearly 750,000 teen pregnancies every year. Parenthood is the leading reason that teen girls drop out of school. Even though we can’t really decide who exactly do we put the responsibility on, the truth yet remains that IT IS HAPPENING.

Remember the Elderly Couple Who Died Together in Titanic? Here’s Their Real-life Heartbreaking Story

Either can the blame on the shoulders of teachers and parents for not educating teenagers about sex or we can accuse the kids of rushing. None of these distract us from the fact that a little life is being involved in all this worldly chaos.

Hannah Mongie, who is now 21, had faced something of the similar situation when she was 18. What she did thereafter is unbelievable.

On finding out that she was pregnant with her boyfriend Kaden’s child at the age of 18, it was quite a big responsibility for 2 mere college students. They had little to no work experience and they had barely entered college.

The young parents had initially decided on giving the child up for adoption because of their uncertain future.  At her 12-week sonogram, Hannah heard the baby’s heartbeat for the first time and recorded it for Kaden to hear. Barely two days after hearing his son’s heartbeat, Kaden suddenly passed away.

It was surely an unfortunate event and it flipped Hannah’s world. At that point in time, she couldn’t even imagine giving her baby up for adoption because it was the symbol of her love.

But she knew it would be unfair for the baby if she made him stay with her and not take his responsibility properly. After she gave birth, she made the nurses leave the room for the next 45 minutes.

20 Rules of Life a Japanese Samurai Wrote Almost 400 Years Ago That Will Change You.

In these 45 minutes, she recorded a tearful video for her baby in which she expressed herself to bits. She allowed herself to break down but she made sure she answered each and every question that her son might ask her one fine day.  In the video, Hannah also added praise for Taggart’s adoptive parents, Emily and Brad Marsh.

“I fell in love with them and they were beyond anything I could have asked for,” she set really high standards for someone she was going to hand a part of her to.

The family that adopted Taggart, the Marshes, live 10 minutes away from her. They make sure that she is included in Taggart’s life. She gets to see her baby quite often. This is the most clearly stated truth that irrespective all the bad in this world, good people still exist.

Watch the tearful video below: