Even though most of us would like to think otherwise, the presence of humans in the natural habitat of animals is more harmful than helpful to them. Two subcategories of the species of the giraffe family have now been added to the ever-growing list of the animals that humans have managed to endanger. That is turn means that they face the perils of extinction from this planet.

The International Union for Conservation of Nature (IUCN) has reported a loss of 40% in their total number during the last 30 years. This makes them extremely vulnerable and they are in the group of the Red List of Threatened Species.

There are two certain subcategories of the giraffe family – the Nubian and the Kordofan – that the IUCN re-categorized into the ‘Critically Endangered’ list. Due to the rapid decline of their numbers in the wilderness of Guinea, Eritrea, Nigeria, Burkina Faso, Malawi, and Senegal.

Wholly, the nine species of giraffes have been struggling to grow their population but their birthrates have been damaged due to agriculture, mining, construction, and poaching all across the continent of Africa. As African cities expand, the need for resources and space has been putting a lot of pressure on its natural resources, thereby affecting the natural habitats of many animals.

Co-chair of IUCN, Dr Julian Fenessy claims that it is very common to see giraffes on safaris, in zoos, and they are well represented in the international as well as domestic media. But people in general, as well as conservationists, are not aware that these magnificent animals are at the brink of being wiped off the face of the planet. 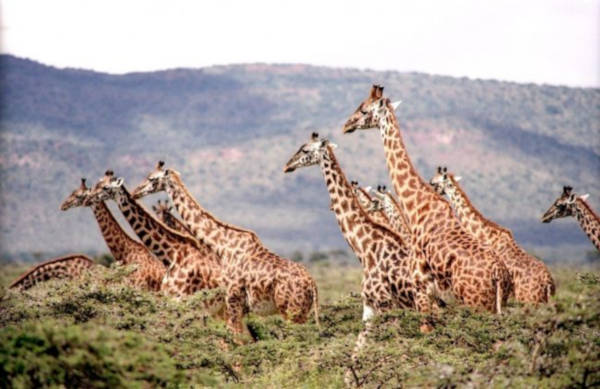 Even though the giraffe populace is doing about alright in the Southern part of the continent, the tallest animal on the planet is under extreme pressure in areas across, West, East, and Central Africa.

It is definitely a rude awakening that one-third of the presently identified subspecies have to be classified as ‘Endangered’ or ‘Critically Endangered. A lot of experts have been raising these issues very persistently for a considerable amount of time now.

The population of giraffes majorly faces two threats: poaching and the expansion of towns and cities into their territory. A lot of villagers who face the scarcity of food kill giraffes for their flesh. But as per Jani Actman, who works at the National Geographic, giraffes are killed in order to obtain their tails. The villagers see giraffes as a symbol of wealth and they use them as gifts for dowry when the father of a bride gives his daughter away in marriage in certain cultures.

As opposed to just rhinos and African elephants, giraffes are also targets of hunters as their bones and heads fetch up to $140 USD each. It is high time to raise awareness about these issues before the tallest animal on this planet is gone forever, only to be seen in photos and videos. We really hope that this beautiful creature can be saved before it is too late.