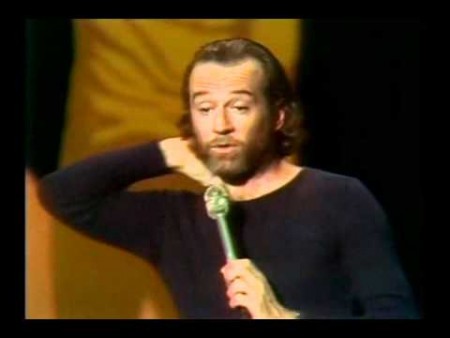 On Location: George Carlin at USC” is Irish-American comedian George Carlin’s first ever HBO special, recorded during the Summer of 1977 at the University of Southern California in Los Angeles.

This unique taping lasted 85 minutes, and, at age 40, marked a new era in Carlin’s career. He explained to the audience that before this special came about, that he never did a show for home consumption or reproduction. To date he has recorded 12 shows for HBO, and is soon to record a 13th – 30 years after his first.

In the process of planning this broadcast, the word spread quickly, and so much so that it resulted in a serious legal hearing at the Federal Communications Commission. Due to the controversy, Carlin sticks with more user-friendly material.

However, a federal court of appeals ruled in Carlin’s favor and allowed him his right to free speech. This was mentioned during the opening of the program by Newsweek columnist and 60 Minutes reporter Shana Alexander (1925-2005), which explained that it is the kind of entertainment that was rarely seen or heard on cable or network television at the time.