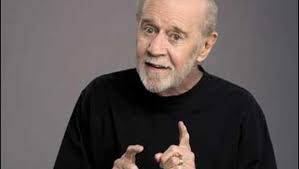 George Carlin’s place in the pantheon of standup’s counter-culture pioneers is assured, along with Richard Pryor’s and Lenny Bruce’s. In It’s Bad for Ya, his final special for HBO, he is supreme; as angry, as skilled and as sophisticated as always, and very funny too.

Funny, how? Heresy alert. For all the adulation that surrounds Carlin, some of his shtick now seems dated – not least because many of the battles he raged about so brilliantly have already been won. Though his skill and intelligence are fierce, his war was primarily with his times (this clip from a 1978 gig in Phoenix, in which Carlin plays around with what really constitutes bad language, hasn’t aged well).

Elsewhere, Carlin’s intelligence and skill are occasionally too much. His classic, often-repeated routine about “stuff” – “that’s all your house is,” he reflects, “a place to keep your stuff while you go out and get more stuff” – is almost Shakespearean in the compulsive rhythm of its wordplay, but is it actually funny? Are its observations true?

In It’s Bad for Ya, however, he is dextrous and irascible to superlative effect. Great routines about old age remain a rarity – and this is one. Carlin was 70 when this show was recorded, one of very few great standups to have got to that age (despite three heart attacks en route). “Don’t be afraid of getting old,” he says. “It’s a great time of life. You get to take advantage of people and you’re not responsible for anything.” What he doesn’t add (maybe doesn’t need to add) was that by then you’ve spent a lifetime honing what you do. The line with which he begins the show is one of the best openers I’ve ever seen.

Carlin never stopped being an angry beatnik, and one of the great pleasures of It’s Bad for Ya is that both the anger and the hipness are still in play. “It’s all bullshit, folks,” is the old hepcat’s circling refrain. Yet never does he simplify. There cannot be many other standups who make casual use of words like “sublingual” or the phrase “let’s grant this proposition” while delivering a disquisition on the difference between rights and privileges.

Lest that sound too academic, his gags remain as sharp as ever. On patriotism: “It’s a fucking genetic accident! You wouldn’t say ‘I’m proud to be 5ft11,’ or ‘I’m proud to have a predisposition for colon cancer.'” On religious doctrine: “At what point does all of this stuff just break down and become a lot of stupid shit that somebody made up?”

In It’s Bad for Ya, some of the old feline grace has gone, but his knack for pointed commentary endures. He died less than four months after it was filmed, and less than three months before the fall of Lehman Brothers. A pity; he would have hugely enjoyed the sight of capitalism tottering.

Steal this: “Every child is clearly not special.”