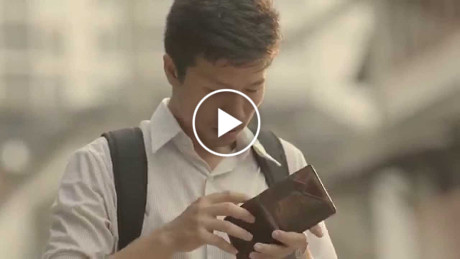 This is an inspirational video that shows how true life heroes are made. It all started with a young boy, walking on the street. As the water began to pour from above, to the plain ground, he felt concerned about it and adjust the bowl that should be under the dropping water. What is his concern about the wasting water?

And just after that he saw a woman across the street with her food stuffs on a wheel, helpless and couldn’t do anything but to stand and watch the moving traffic. He quickly ran to her, like he wanted to pass by, but he took the wheel like his and held the woman along with the wheel to cross the busy road.

It would look as if that’s all the young man has to offer, but as he sat to eat in a cafeteria, he met a dog, looking up and down, like a homeless one, and hunger boldly written on its face. The young man took the meat on his meal, and shared it with the bony tale dog of a homeless type, “what a feeling”.

As he worked on his way home, he met a woman and her daughter sitting beside the street begging for money. Though he doesn’t hold enough cash, but he felt concerned and brought out some of the money on him to give this begging woman, what I understand by this is perfect humanity, which makes a true hero and can change the whole world.

What has this young man gained? Though the result might not come directly to him, but of course it will be poised to the people he truly care for even animals, and this is what we’ll should inculcate into our daily life, and the perfect atmosphere would be shaped in no time.