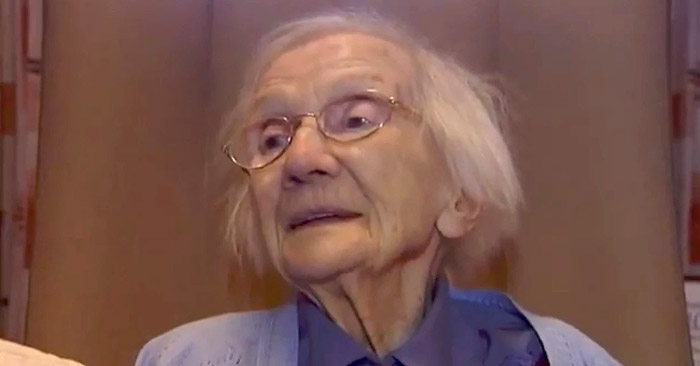 Crusades have been undertaken to find the magic water which will lead to eternal life. But there was no victory story regarding the Fountain of Youth ever being discovered. Voldemort tore his soul apart so that he’d never die. And we all know how that one ended. Forget about eternal life, these people didn’t even manage to live up to 100 years old. Little did they know that the answer to at least a long life, if not a forever one was hidden with this sweet Scottish women all this while.

Jessie Gallan has seen the earth go around the Sun 109 times. That’s like the total of the average life if two Voldemorts combined, give or take a decade. And she managed this without killing any baby’s parents or some other horrifying act. In fact, she’s the favorite amongst the folks at her nursing home and greets everyone with a benign smile, even after her 109th birthday.

She became the oldest person in Scotland when she celebrated her 109th birthday recently and she is willing to share her secret with anyone who’d listen. According to her, your best bet at having a long life is avoiding men as much as possible. And there must be some truth to her claims because so far it seems to work for her pretty well. Other than avoiding the opposite sex, she also recommends having porridge for breakfast every day.

Now, obviously we know that these are not medically proven and clinically tested to lead to a long life, but her life story is interesting to know nonetheless. She had been living on her own since a tender age of 13. At a time when most of the teenagers are throwing temper tantrums and struggling through puberty, she was earning a living for her own. And since then she hasn’t stopped to take a break or to even try to follow in the footsteps of what is expected a traditional womanly lifestyle.

She doesn’t hate men or want them to vanish from the face of the Earth; it is just that in her opinion that they are worth much less than the fuss which they create. And having avoided them her entire life, all 109 years of it has been a welcome experience for her. It is something that she wouldn’t regret even though the world thinks that being with someone completes you.

And keeping herself busy and occupied with work has made it easier for her to not miss something which she clearly didn’t need. This sweet old lady is blissfully happy with her daily bowl of porridge and doesn’t care what others might think.

Well, kudos to her!