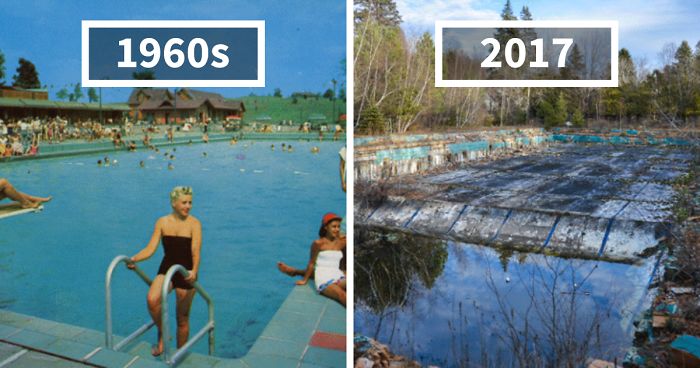 This project started when an old photo caught the attention of photographer Pablo Iglesias Maurer. The photo was a postcard from a resort in the1960’s. Pablo began wondering how is this place now and this led him to create an amazing series of photos titled Abandoned places.

The postcard was entitled “How to do a successful golf course”, but when Maurer visited the place, he discovered that is not the same place anymore. He turned his camera on the abandoned building and pulled out the same photo ‘ 5 decades after “.

From that moment, Pablo ordered other 60 postcards from eBay and started visiting these places to photograph them in their present condition.

“The places have changed and nothing shows the resemblance of the past. Many times, I try very hard to bring into balance the 2 photos. But time blurs the difference and brings everything into focus,” Maurer said.

1. The pool of Grossinger once had a heated floor. Now, they are abandoned by the Decade of 1990.

2. The outside of the pool of Grossinger-Olympic-sized-which was built in 1949 and the construction costs of today would be $5 million.

3. The Brown, red and orange colors of the restaurant, have become green.

4. The resort  Homowack Lodge ended in mid-2000. Shortly thereafter, it was open as a summer camp and eventually closed by the Department of Environmental Conservation in New York.

5. Inside the Tennis Center Club Grossinger.

6. The effect of time is evident.

7. Sunbathing and swimming in the Poconos. 1967 date. «Dear John, if you were here you were going along for riding or you played golf. Be well until we, Dr. Waterman.»

8. The bar of an abandoned resort in Poconos then and now.

9. The indoor pool at Grossinger opened in 1958. The inauguration was attended by Elizabeth Taylor and was an attraction for many famous.

10. The theatre with a capacity of 1,200 people in Pokonos. It remains impressive, even now that it is abandoned.

11. The main building of this resort in Pokonos was destroyed by a fire and replaced in early 1970.

12. The time decay is evident.

13. Once this was the best resort in Poconos.

14. Once the housing estate housed couples and families enjoying their holidays.

15. This building was one of the last opened at Grossinger in 1964.