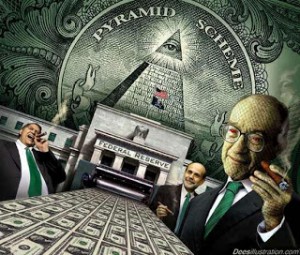 The Money Masters  is a historical documentary that traces the origins of the political power structure. The modern political power structure has its roots in the hidden manipulation and accumulation of gold and other forms of money. The development of fractional reserve banking practices in the 17th century brought to a cunning sophistication the secret techniques initially used by goldsmiths fraudulently to accumulate wealth.

“I believe that banking institutions are more dangerous to our liberties than standing armies.” –Thomas Jefferson

“It is well enough that people of the nation do not understand our banking and money system, for if they did, I believe there would be a revolution before tomorrow morning.” –Henry Ford, founder of the Ford Motor Company

“Give me control of a nations money supply, and I care not who makes its laws.” –Mayer Amschel Rothschild, founder of the Rothschild banking dynasty

“Some people think that the Federal Reserve Banks are United States Government institutions. They are private monopolies which prey upon the people of these United States for the benefit of themselves and their foreign customers; foreign and domestic speculators and swindlers; and rich and predatory money lenders.” –The Honorable Louis McFadden, Chairman of the House Banking and Currency Committee in the 1930s

With the formation of the privately-owned Bank of England in 1694, the yoke of economic slavery to a privately-owned “central” bank was first forced upon the backs of an entire nation, not removed but only made heavier with the passing of the three centuries to our day. Nation after nation has fallen prey to this cabal of international central bankers.