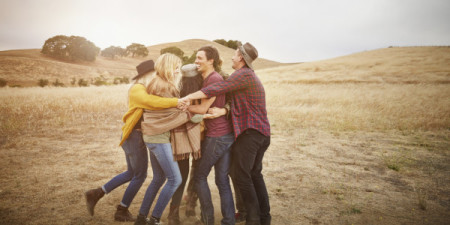 Just in time for my final year of college, a number of independently-moving disasters all converged to create an almost perfect rock-bottom scenario. On top of it, I lost all my friends.

I was studying a subject I didn’t care about, with a GPA of two-point-something (and falling), and I just couldn’t see myself ever doing it for a living. Since my cleverness was always my main source of self-esteem, my unprecedented academic troubles translated to an unprecedented collapse of personal confidence. In addition to this, my dad was sick, my sister was overseas, my cat was dead, terrorists had attacked New York City and my mom was trying to hold us all together.

As if by conspiracy, my best friends all moved away around that time. One had already gone, after his employment had dried up here, to live with his parents in Calgary. Not long after, another pair of them went to work menial jobs at a ski resort in the Rockies. Then a fourth one, whom I’d introduced to those two, thought it sounded pretty good and joined them.

So within a few months, I ended up with no confidence, a fragmented family, and a bleak future on the career front. What I needed most during this period was friends, and fate chose this time to show me what it was like, for the first time, to have none.

Given this unlikely collision of circumstances in my friends’ lives, I’m tempted to argue that it wasn’t my fault that I ended up friendless. But I know now that it was — I was taking an enormous risk by living with a particular habit, and you may be doing it too. In fact, I think it’s something millions of people do.

The delicate structures that keep us together

You might be wondering why I only had four friends to lose. I actually had many more than four friends. However, these four were not only my best friends, but they each occupied critical points in my network of people.

We all have friends that we know only through certain other friends. Suddenly, I didn’t see my high school friends anymore because we all congregated around friend A. I didn’t see my former work friends anymore because we all kept in touch via get-togethers at friend B’s house. Friends E, F, G and H were great people and I liked them, but it we never made plans together without friend C. Friend D knows everybody — and I thought I did too, until he was gone.

I had no idea how fragile this structure was until it was broken and no longer attached to me. There were still people in the city that I was friends with, and could have hung out with, but it would have taken an uncharacteristically forward act of reaching out on my part, and that just wasn’t something I had ever learned to do.

Why had I never learned to reach out? Because I never needed to — there were always enough people in my life who did take the initiative to propose the plans, invite me to things, and call to see how I was doing. I almost never initiated things, because I already had more invitations for socializing than I wanted to accept, and I did like spending a lot of time alone. What had felt like social abundance was actually the growth of a dangerous habit: depending on others to create my social life for me.

Even after the catastrophe that was my early 20s, I didn’t understand that this was what was happening. Things got better on their own, and I still believed the collapse of my social life was due to circumstances beyond my control. A few friends moved back. I went back to school, met some new people, got more invitations to socialize, accepted some of them, and I had a social life again.

But then in 2012, just as I had become the most socially active person I’d ever been, it happened again, and my terrible habit finally became visible to me.

It was a lot less dramatic this time, however. There were no wars or illnesses or bad GPAs involved. It began when I went hyper-frugal to save up a job-quitting fund. I didn’t want to spend money on booze or restaurants or parties any more, so I said no to almost every invitation for nearly a year. Eventually the inviters stopped bothering, and I lost track of my biggest circle of friends. I did, however, still spend a ton of time with my girlfriend at the time, who is now my best friend. I would have been up the creek without her.

Then when I finally did quit my job in the fall, I stopped seeing a lot of another good friend, because we had worked out of the same office. He was, of course, another vital connecting piece, this time to my oldest and most important circle of friends. And they began to drift into the fog too.

The diagnosis was clear now: I had been a lifelong relationship freeloader. It’s scary to think where I would be without people actively picking up my slack. If they were all as passive as I was I’d be a very lonely man.

Relationships of all kinds take initiative and work, and because that work was somehow getting done in my relationships, I never saw it as a responsibility. I got away with it for so long only because I was blessed to know so many people who did.

It’s important to note that I wasn’t the only one being passive about my relationships. Many friends — E, F, G and H, for example — also could have reached out, and didn’t. And when you get two people who both depend on the other to reach out, there is no friendship.

After twenty years of this bad habit, I wonder how many of these failed, would-be friendships I’ve conspired in. It’s humbling, and kind of sad, to imagine deep and long-lasting friendships I’d have today if I’d picked up the slack whenever it was there.

I also want to make it clear that this isn’t purely the result of laziness either. For those of us with a history of social anxiety, there are long-running fears at work, even after years of improvement. I’ve progressed from being terrified of talking to tech support staff to being only slightly afraid to call certain friends. But as long as someone else is doing the work for you, it never seems like the right time to push yourself.

Whatever our reasons, I suspect most of us don’t pull our weight socially, and we depend, possibly without realizing, on that wonderful minority of people who are tirelessly connecting us freeloaders and cowards. I can identify a handful of these people in my life, and I’m sure you could too if you thought about it for a moment.

In every relationship there’s a certain amount of initiative that must be taken, by someone, in order to make sure you still see each other. It’s reasonable to assume we have a moral responsibility to do at least 50% of this work. We ought to be extending an invitation for every one we receive, roughly, if we value it when people do it for us.

This is true even in cases where we know that one party, if necessary, would do 100% of the work until the day they die, even if the other person never took the initiative. Who does the dialing more often, you or your mother?

It is something to take seriously. And in particular, we should give extra thought to the people we love whom we know have a hard time reaching out — especially this time of year.

Happily, I’ve begun to reunite with my dormant circles, after talking out this problem of mine with my best friend. But the first time I went to call a friend whom I hadn’t talked to in a while, I froze. It was scary to call someone out of the blue. It felt like I was about to bungee jump or something. It made me realize I have very little experience at doing that, or any of the other little skills it takes to be someone who actively maintains relationships.

All the more reason to get used to it, and never make the other person do the heavy lifting again.

I’ll leave it at that, because what I’ve said so far has either rung a very loud bell for you or it hasn’t. Besides, I want to finish this article by noon, because friend K — a tireless connector of people — has invited me to lunch.