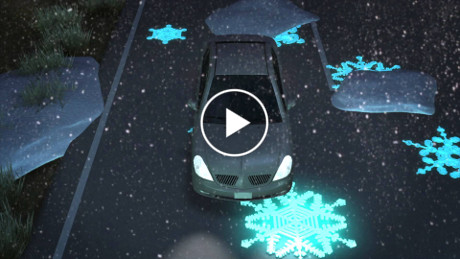 Recently, Dutch designer Daan Roosegaarde and civil engineering firm Heijmans made headlines by installing the world’s first glow in the dark road in the Netherlands.

The futuristic road is lined with paint that is treated with a photo-luminizing powder that charges in the sunlight, and emits a green glow for up to 10 hours at night. The light charging luminescent road paint was developed as part of Roosegaarde’s ‘Smart Highway’ concept, which won ‘Best Future Concept’ at Dutch Design Award.

The pilot program, which replaced standard street lighting on a 500 meter stretch of highway in the Netherlands was praised by users for being energy efficient and for its Tron-like design. However, engineers ran into an early hiccup shortly after its unveiling, the luminescent paint turned out to be sensitive to moisture caused by rainfall, which severely compromised the light output emitted by the markings. Heijmans says that the issue is just a temporary and expected stumbling block for the pilot program. The firm plans to use the insights gained from the month-long trial to introduce an update to Glowing Lines 2.0, which is expected to roll out this summer.

The Smart Highway concept also includes interactive lights, smart energy and road signs that adapt to specific traffic situations. The aim is to reduce in-car distractions so drivers can pay more attention to the road.

Once applied to the road, a dynamic weather sensing paint could change color or illuminate a pattern in the presence of water, ice or other elements that could make driving dangerous.

Hejimans also want to include “induction priority lanes” for electric and “wind lights” that would only illuminate as a car flies by.