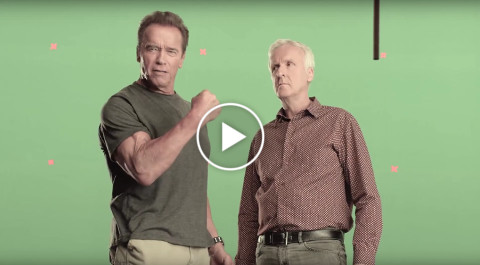 Last month the Chinese government released a new set of dietary guidelines which, if followed, could reduce the nation’s meat consumption by as much as 50%. Given that China boasts the world’s largest population at approximately 1.357 billion, a cutback of this size is bound to have a massive global impact.

Fuelled by health concerns, China hopes with this recommendation to minimize or even prevent heart disease, diabetes, and other diet-related illnesses that have been publicly linked to meat consumption.

Academy Award winning vegan director James Cameron, inspired by this move, teamed up with former California governor Arnold Schwarzenegger to film a series of PSAs to encourage North Americans to do the same.

The PSAs were shot on the set of the newest Avatar film, and while they are still yet to be released, the following promotional video has already gone viral:

In addition to tackling the health concerns connected to meat consumption, it appears as though the PSAs will also be addressing the negative impact that the mass meat industry has on the planet.

To me, the most comprehensive resource for understanding this situation is the documentary Cowspiracy, which several prominent figures, including Leonardo DiCaprio, have publicly supported and promoted. From greenhouse gas emissions and land cultivation to the consumption of water, the meat industry’s impact on our planet goes far deeper than many of us may think.

Considering our society is largely celebrity-obsessed, it is great to see recognizable figures get behind this movement and use their reach to help better the planet. Dozens of celebrities have not only gone vegan but have made their decision and reasoning public in hopes of inspiring others to make the change.

I’m not suggesting that a completely plant-based diet is the optimal dietary lifestyle or is going to work for everyone, but I do think an awareness of the issue and a conscious attempt to at least reduce our meat intake is becoming a global responsibility.

If you regularly consume meat, start by at least challenging yourself to have one day per week where you go meat-free. If you are concerned about this decision’s potential impact on your protein levels, familiarize yourself with some of the many non-meat sources of it.

As Cameron notes in the video, we need to see everyone on this planet as one cohesive unit. The more we acknowledge this interconnectedness and work within, rather than against, that understanding, the healthier our planet will become, and the healthier we as its inhabitants will become too.