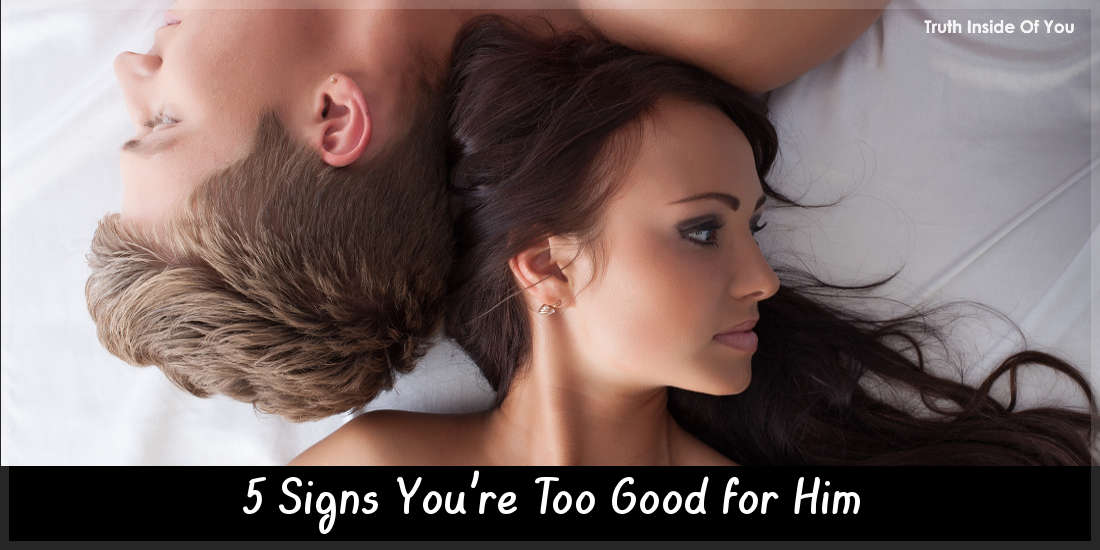 Are you happy, I mean truly happy? Maybe there are moments of happiness where you feel it might work, but are you happy enough to not wonder about the relationship on a constant basis? It’s possible you have wandered into the wrong partnership, and just don’t want to give up just yet.

There’s good news, if you can look at that way. There’s a cheat sheet to help you understand whether you are in the right relationship. I know, you’ve heard many of these lists before, but have you looked at it from the perspective of what you deserve? I didn’t think so.

Do they deserve you, your time, your effort and your beauty-inside and out? What draws the line between normal struggle and abuse? Here are a few ways to tell if they truly do NOT deserve your partnership in life. IT’s not as hard as you think to figure out.

Recently, I watched a TED talk vid about lying and humans. Apparently, it’s impossible to never tell a lie. Granted, I get that. But there is a difference, as hard as it is to understand, between lying and being a liar. Those who do not deserve you will lie to you on a frequent basis because they have no concern for your feelings over their own.

A healthy relationship sees lysing as detrimental to the union and honesty is worth anger always. Yes, we lie, we all do, but being a liar spells disrespect, in many areas of our relationship.

Just like lying, cheating is disrespectful, and a whole other boatload of nasty definitions. Cheating says your partner is not enough, not deserving of your loyalty and really not the one. So, why should you deal with a cheater? They usually do not change, and truly enjoy their experiences with others outside the relationship. This shows their true colors and true feelings about you-which is so undeserving of your time.

Now to the less than obvious no-nos…

IF your partner is always criticizing you in front of his friends, and making you look like the bad guy, then they definitely don’t deserve your time. Those who belittle others are suffering from their own self-doubt and need someone else to take the pain they are going through. They see you as a buffer, not a lover. You are being used and abused all at the same time, so It’s best to get rid of them quickly before your own self-esteem takes a hit.

4) They flip the script

Maybe you haven’t heard this saying before, but it’s interesting. I learned about “flipping the script” in my twenties when my husband used it to control me. He would stay out all night drinking while I took care of our infant son. When I would get angry about his irresponsible behavior, he found ways to turn the situation around so that I looked like the one to blame. Believe me, this can be done.

They don’t want to take responsibility for their actions and they damn sure don’t want to grow up. This is the profile of someone who does not deserve you-not one more minute. Watch for this behavior and nip it in the bud. IF they won’t change, then leave.

5) They have no responsibilities

IF they can work and just won’t, then they aren’t worth your time. If they make an effort, that’s one thing, but if they make excuses over and over, then they are being selfish. Selfishness has no place in a healthy relationship. Men and women both need to support each other by working or doing their part in the household. If they cannot work for some reason, then they can take care of the home.

Pay attention and make sure that responsibilities are equal. IF you are unsure of this, communicate about it and decide what needs to be done or improved. IF there’s no effort or desire, then you know what to do.

So, do with this as you wish, but just think about it.

Are you happy, I mean, really happy? If not, then ask yourself why. It may just be that your partner doesn’t deserve you. Pay attention to the signs, don’t make excuses and practice being independent. If you must go it alone for a while, then be it. IT’s better than dealing with someone who just doesn’t respect you.

This means they just don’t deserve you either. Take care and good luck.