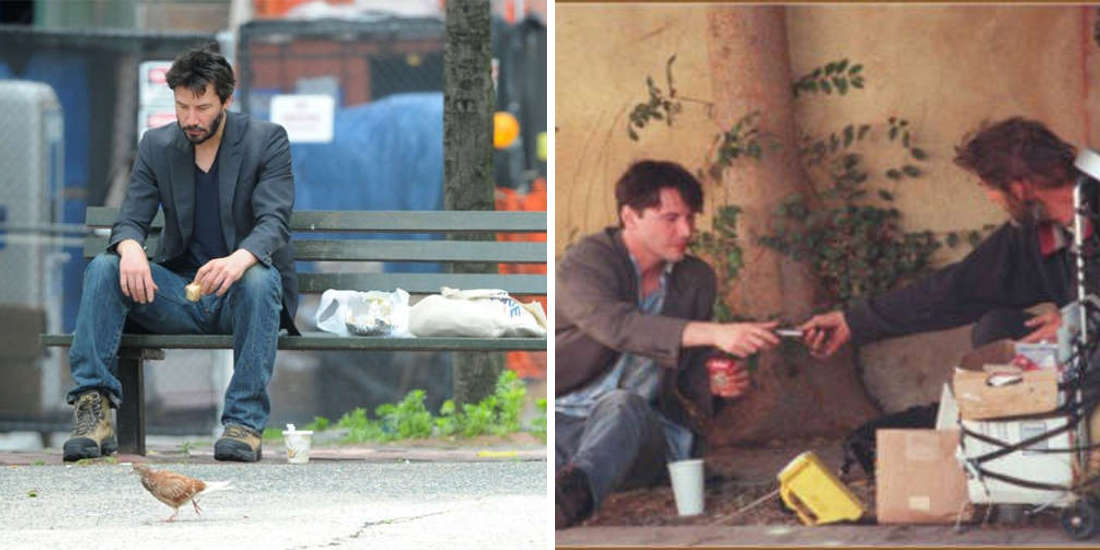 The Matrix trilogy was considered to be an unusual piece of work in Hollywood. It was a masterpiece because of the liberating idea and pro-human notion it carried along with it. Keanu Reeves’ spirited nature in his real life had made the role of Neo, the leading character of the movie, very remarkable.

Reeves has kept himself away from the dark side of Hollywood and it has been easier for him as he is a kind-hearted person. His generosity is not only seen in the pictures or in the stunts but is also seen in reality.

A record of references has been collected by the Redditors from the people who had some awesome Keanu Reeves stories to share:

“I stepped out of my college towards the end of the 90s and got my first project on the set of Chain Reaction (starring Morgan Freeman and Keanu Reeves) as a junior prop designer. During the last days of the shoot, Reeves had treated every man on the set (as well as me) alike and he would buy food for us. Honestly, he was a very genuine person I had worked with.

After this, I’ve worked with several actors but I have hardly known someone as kind and compassionate like him. Nearly all the actors that I’ve known are extremely unpleasant as they think of themselves to be greater than us. Reeves, on the contrary, was a very friendly and warm-hearted person.”

He assisted a crew member with a financial help of $20,000 for his family trouble.

“Keanu came to know that a member of his group was having some trouble in his family and immediately he provided him with an extra payment of $20,000 as Christmas gift to settle the issue. He was an amicable person who used to ask the people their names and greeted them daily and communicated with everybody as his co-ordinates rather than treating them below his level as they were just building the place for the movie. Never have I heard anyone saying anything unpleasant about Keanu.” – Kahi

His chivalry was noted when he drove a woman home since her car was damaged.

Reeves used to spend time with the crew and out of everybody only he had earned the respect from the coaches of martial arts. He was known for his bravery and humble nature. In the bullet scene of the first Matrix movie, Reeves refused to have earplugs while the charges were blowing to maintain the authenticity of the scene.

Even if he is not doing anything for anyone he is keeping everybody around him delighted.

“My brother works in a café in New York where they have their own way of brewing the coffee. Reeves used to visit this place and ask my brother about how they made this coffee. Although it didn’t taste very good but, he used to pay attention to the process and reply in a very positive manner which showed his interest in the shop.”

He was claimed to have purchased Harley Davidson motorbikes for the entire special effects crew.

“My friend said to me that she was left alone on a highway as her car was damaged. She could not ask for help from anyone as mobile phones had not yet been so popular. Suddenly a black car arrived and it was none other than Keanu. He tried to fix her car but when it didn’t work he asked the AAA for her. After that he suggested to drop her home and it was 50 miles away from his destination. He also provided her with his contact details for any help.”

Keanu was blamed for living his normal life and chilling around.

“My neighbour went crazy when she found her and Reeves camping in the same place. She noticed him chilling around with his single tent and his Dodge car. But later she complained that whenever anybody used to look at him, he turned away his face because he wanted to stay casual for the time being.”

Reeves was seen to be friendly to a homeless.

“This happened in 1997 when Keanu was spotted to have shared his day with a homeless man on the streets of Hollywood. He was on his own when he met this man and shared food with him and lent an ear to his story. This would have gone unnoticed if the media hadn’t captured it.”

In order to ensure the secured payment to the crew, Keanu used his own money in The Matrix.

According to Roger Friedman, Reeves had not given a cheque to anyone. A portion of his earnings was used in the film so that the crew members could continue with their work on the sets. He had done this in other movies such as The Devil’s Advocate and TheReplacements in order to let the studio cast other famous actors.

He is reported to offer his seat to someone as he is well-mannered.

Although the actors generally don’t take a ride in the subway and when they take it, they don’t give their seat to anybody. But in this video Reeves is seen giving his seat to a lady who has just entered the compartment.

Keanu prefers not to cause trouble for anyone

Reeves never acts like a spoiled brat even if he is drenched in the rain. There was anincident where had to wait in the rain for his own wrap party. According to Chauffer Ronnie Sunshine who was also at the spot, “Reeves is a really patient man and he didn’t even try to use his identity to cause any trouble.”

“He was waiting in the rain for his friends to arrive. He didn’t use his stardom also”, added Sunshine. “After he went inside he also asked the DJ to make an announcement regarding a credit card that was found by him on the dance floor”, said Noel Ashman, the owner of the club.

Let us know how you felt about these Keanu Reeves stories after you have read this article.