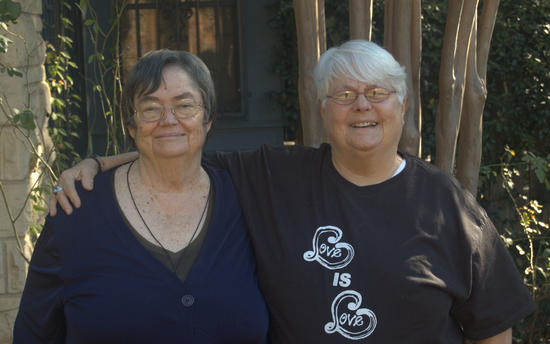 Most people’s lifeworks are gathered in one place, and though invaluable to ourselves, rarely would such work be important to hundreds of people scattered all over the world.

Trella Laughlin is an exception, for almost 20 years, Laughlin traveled the globe from Bosnia to Nicaragua and elsewhere, video-documenting and exposing injustices  for the the Foundation for a Compassionate Society and chronicling the efforts of men and women to right those wrongs.

For the past five years, Laughlin has spent hundreds of hours both here at home in Eureka Springs and in Austin, Tex., archiving and digitalizing the vast collection of videotapes of her shows held at the Austin History Center.

“I interviewed women commandantes in the FMLN and taught them how to use video equipment to record their own grass-roots efforts and struggles toward liberation,” Laughlin said.

“I saw a mother who had walked hundreds of miles, with her baby in her arms, to participate. What hardships people go through to have dignity in their lives.”

Trella Laughlin was born in Mississippi and grew up in her grandmother’s boardinghouse in Jackson.

Laughlin said, “My first job was as a dental assistant in elementary school. Then I made donuts at Baylor, ran a bar, worked for a San Francisco newspaper, sold food freezer plans, worked in a sawmill, picked small green ‘tommy toes’ for an Arkansas pickle factory, took the census in the Boston Mountains, taught college English and journalism, taught high school special education classes, worked in Head Start and cleaned the New Orleans Hotel for Barbara Scott.”

Laughlin described the enlisted military she worked with as “just ordinary folks trying to get a skill, a job, sent overseas by rich, old white men.”

But she said the officers were “elitist, racist, and mostly drunk.”

Later, Laughlin played in an all-women’s country western band in Austin, then moved to the South Fork of the Little Red River in central Arkansas “to live in an Army mess tent without electricity or vehicle, trying to live simply with nature.”

This experiment ended when Laughlin and others were sprayed out of the valley by 2,4,5-T, a component of Agent Orange which Laughlin describes as “pushed on Arkansas farmers as a good way to clear hardwood forests for cattle pasture.”

Laughlin described the herbicide as highly toxic and added many of her friends who were exposed to it have since died from cancer.

“I had ovarian cancer myself,” she added.

“I taught Journalism, questioning, and ‘taking it to the streets,'” Laughlin said with a laugh. “I also joined an anti-racist group of white people who confronted the Ku Klux Klan. I got threatened, spit on, beat up, brakelines cut, my friends harassed by the FBI, phone tapped, mail opened, and house broken into.”

She said these experiences either help radicalize a person or frighten them away, and, in her case, it radicalized her.

Laughlin’s M.A. from Stanford University was in Communications and Journalism, but her training in video work came from classes she took at Austin Community Television in camera work, editing, special effects, lighting, audio and multi-cam production.

“I had many talented friends in public access TV who shared their skills with me,” she said.

“Let the People Speak” was the name of Laughlin’s weekly show, produced in Austin and shown there as well as in San Francisco, Washington, D.C. and elsewhere.

The show began in 1980, when Laughlin and other protesters, countering the Klan’s efforts to recruit across Texas, demonstrated at every Klan appearance.

Laughlin video-recorded and broadcast the results. “I saw my show as a way to give white people a chance to speak out against racism,” she said.

“At one event I accidentally got onto the wrong bus,” Laughlin said. “It was the Klan bus. They knew who I was, too. I felt like I was surrounded by mountain rattlers. There’s a certain risk that goes with being a ‘left’ journalist.”

Laughlin was in Managua, the capital of Nicaragua, the night before the Sandanista revolution.

The Sandanistas were a revolutionary group which overthrew the rule of the dictatorial Somoza regime, which had held power for 50 years, then went on to engage in a long struggle against the U.S.-backed Contras.

“The Somozas, backed by the U.S., had ruled the country for half a century,” Laughlin said. “When they were losing to the Sandanistas, the CIA sent a plane. Somoza had stolen millions from the World Health Organization and fled to Miami.

“He had actually pocketed money for medicine, for polio vaccines, and substituted red dye in the sugar cubes in place of the vaccine. There is a whole generation of people there of a certain age who suffer from having had polio as a result of that red dye.”

“I saw Israeli settlements that had taken over the Palestinian land,” she said. “They looked like suburbs. they took all the water to water their golf courses and their yards, so it’s really hard to understand the Israeli side of things. I hate the Holocaust and anti-Semitism, but I do not understand why some of the same methods are being used against the Palestinians. I shot a lot of footage at that time, and I was afraid I couldn’t get it out, so I mailed the tapes to someone back in the U.S. as I traveled.”

The Foundation for a  Compassionate Society

In the mid-1980s, Laughlin met Genevieve Vaughan, a native Texan heiress who donated her millions for social change.

“She is an extraordinarily brilliant woman who puts her money where her mouth is,” Laughlin said.

Vaughan started the Foundation for a Compassionate Society, an assortment of women from all backgrounds and cultures whose mission was to carry out programs for social change in the U.S. and abroad, working with other people in progressive organizations.

Geneveive gave me a computer system whereby I can take the tapes and convert them digitally,” she said. “These broadcast tape are ¾”, an antiquated format. It’s all heavy as hell.”

Laughlin has been working the past half decade creating a website for “Let the People Speak,” so all her programs will be available online.

At home in the Ozarks, Laughlin ponders her future and says, “I need to raise money to finish digitizing all my tapes. Libraries don’t have any money for this. We have to spend billions on war, you know.”

While her vision is fixed on completing her life’s work which led her around the world as a documentarian, Laughlin still remains focused on the world around her.

“I am not fond of homophobia, or any kind of hatred. I keep an eye out for gay and lesbian rights in Eureka Springs and Arkansas. We have to struggle for justice every day.”