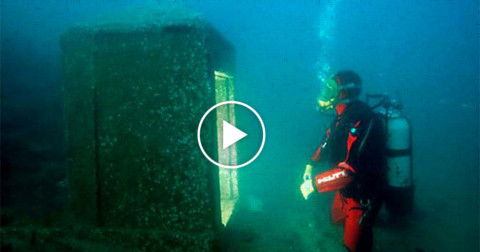 Ancient legends that many considered fairly reliable historical sources, often contain references to great ancient civilizations (or even entire continents) which flourished in the past, but at some point disappeared–often because of terrible disasters. Everyone knows Atlantis and El Dorado–mythical names of a forgotten history of humanity, which hides many secrets.

This does not mean that these reports may not in some cases be based on real events: there are few ancient cities that have been lost, to the point that many believed was only fantasy products. Very characteristic example is the case of Troy, which was thought to be just a legend, until Heinrich Schliemann‘s discoveries.

Petra, Jordan: Most will know this city from “Indiana Jones and the Last Crusade ‘. Carved in stone, found in 1812 by a Swiss Explorer. Thousands of years ago, this city was an important trading post until it was hit by devastating earthquake in 363 A.D. The year 663 A.D was abandoned, to be found again centuries later.

Skara Brae, Orkney: This settlement on the Scottish Orkney Islands goes back to 3000 BC and was discovered in 1850. After a strong storm that swept away the soil cover, but its significance was understood in 1924, when further study showed that this was a highly developed society.

Tikal, Guatemala: Considered that there lived about 100,000 people, in a state with temples, palaces, canals and many other plants that suggest sophisticated culture. However, the town was abandoned in 900 AD due to food shortages and was forgotten, lost in the jungle. It was discovered again in the late 19th century.

Angkor, Cambodia: The state where the famous Angkor Wat is, was one of the largest cities in the world between the 9th and 15th centuries, during which it was abandoned.

City of lions, China: The paradox is that the city of Ming dynasty was not just “lost”, but sank (and forgotten) in the 1950s, when the Chinese Government decided to build a hydroelectric station in the area, resulting in the creation of an artificial lake. When explored again in 2001, it was found that he had sustained very well.

The lost city of Honduras: Explorers and scientists were looking for decades-a town lost in the jungles of Honduras. Indeed, pilots reported that they saw white buildings from the 1930s. Recently reunited-the “city of the Jaguar” which is considered a cluster of many smaller towns.

Mochentzo Ntaro, Pakistan: Once believed was worthy of the ancient Greek and Egyptian cities. It is believed that it was built in 2500 BC and was discovered in the 1920s. Includes many striking buildings and layout that refers to modern city.

Troy, Turkey: The legendary city came to light thanks to the passion and the controversial figure of Heinrich Schliemann.

Machu Picchu, Peru: A “jewel” among the ancient cities, discovered again in modern times. A city built by the Inca in 1450, was abandoned about 100 years later, due to the arrival of the Spaniards ‘ conquistadores ‘.

Pompeii, Italy: Everyone knows the once sophisticated and ‘ alive ‘ Roman city buried beneath the ashes during the fatal eruption of Mount Vesuvius. Too many buildings have been preserved in remarkably good condition.

By James Red, Tuth Inside Of You.