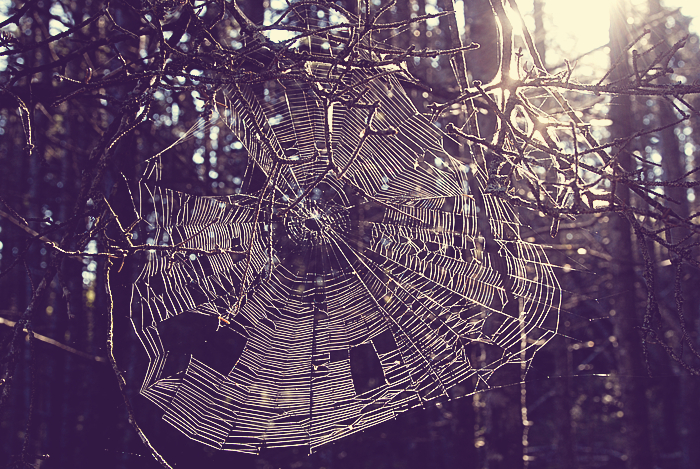 Most orb-web spiders spin their webs in the wee hours of the morning. For zoologist H.M. Peters, who back in 1948 was studying spider webs at the University of Tubingen in Germany, this was annoying as it meant he had to be awake between two and five am most days of the week to complete his study.

Peters asked pharmacologist Peter N Witt to help him find a solution to this problem. Witt then fed spiders with sugar water spiked with caffeine, mescaline, amphetamine, LSD or strychnine– a toxic chemical used used in pesticides – to try to make the spiders weave at a different time of the day.

The stoned spiders changed the size and shape of their webs, making them smaller and irregular, but they kept on weaving in the early morning. Witt also found that caffeinated spiders produce smaller but wider webs, and that low doses of LSD made the spiders spin more webs with regular patterns. Peters eventually gave up, but Witt continued studying spiders.

“Dr. Witt’s detailed analyses revealed that while all orb-web spider webs look basically alike, each is unique to the spider who built it. In fact Dr. Witt was soon able to identify escapees by their webs. The webs also reflect genetic relationships; those built by sibling spiders are more alike than those constructed by cousins,” explains Jane E. Brody at The New York Times.

In 1995, scientists at NASA replicated Witt’s original drug study and found similar results. They used house spiders (Araneus diadematus) and gave them caffeine, speed, marijuana and chloral hydrate. The spiders spun bizarre webs, and the researchers used different statistical tools and image processors to analyse them. “The more toxic the chemical,” wrote the researchers in their paper, “the more deformed a web looks in comparison with a normal web.”

Why did they decided to replicate Witt’s study? MentalFloss reports “this allowed them to quantify the differences between webs, and they suggested that comparisons like this could be used to test the toxicity of different chemicals on spiders instead of ‘higher’ animals like mice, saving time and money.”

The results of the 1995 were published in NASA Tech Briefs.