Tattoos nowadays have become a style for most of the youth. But before this became the trendy fashion was a taboo for most of the countries including America. A few decades ago, the people who dared to ink themselves were soldiers (navy), circus performers and bikers.

In the book 100 years of Tattoos, members of the Navy received tattoos as “a sort of patriotic art”. Artist Paul Rogers was the first one to draw tattoos on a soldier’s skin. He drew eagles and other winged creatures. Later Roger influenced Ed Hardy to draw American flags, plump heart, and buxom women. Over the year the sailor’s culture influenced the man and this is how sailor’s tattoos were born.

Points on Your Body You Shouldn’t Get a Tattoo

The tattoos which fall under the sailor’s tattoo group are Diving swallows, anchor, and nautical stars. Thanks to the helpful illustration by Lucy Bellwood, we finally got an idea of what tattoo means and meant.

In a book The Art of the Sailor, it depicts a sea traveler with tattoos all over the body. Each and every tattoo is named and defined. According to MyModernMet reports, the tattoos show and tell a story of journeys and adventure made by the sailor in his life.

For example, a swallow represents that the person has traveled 5000 nautical miles. A hula girl means a US sailor who has traveled to Hawaii. While some tattoos are for good luck, some others are for sailor’s home. A full-rigged ship means that a sailor has been around Cape Horn. A single Anchor used to show that the sailor had crossed Atlantic or is a merchant marine. Crossed Cannons signified military naval service. A rope in the wrist suggested indicated a sailor’s rank as a deckhand. 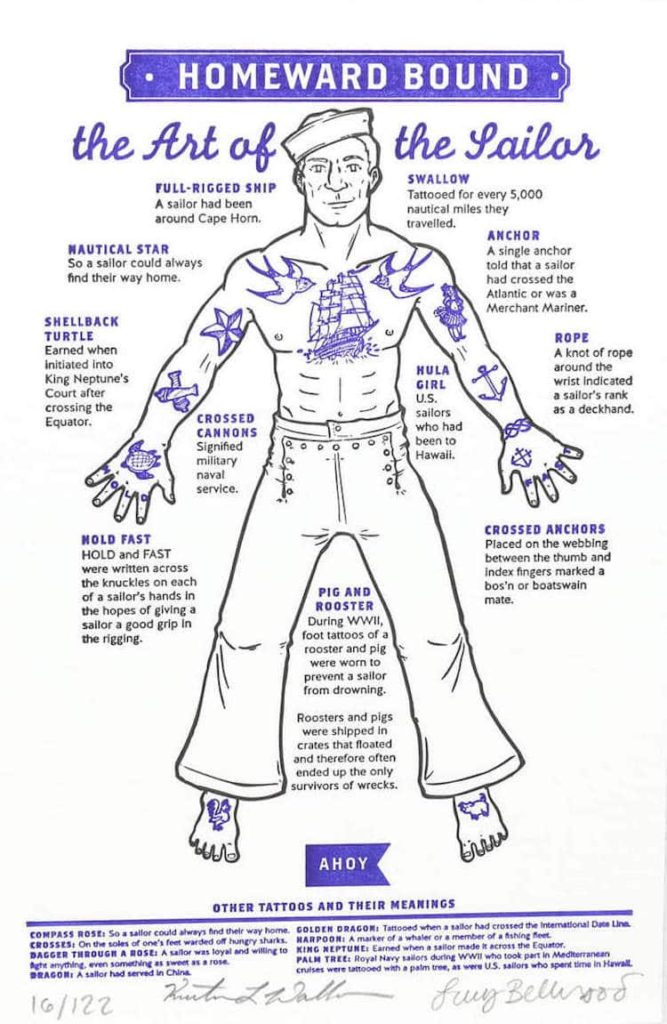