The saddest thing ever happened to Muntathar Altaii, a seventeen-year-old from California. Mun, as he goes by had a freak accident; he was left with a badly bent spine that doubled him up with a terrible stoop. The pain that he endured for three months left him sleepless and shrieking.

What is worse, is the fact that doctors all over the US when approached by Asmir (his father) and Mun, refused to help him, for reasons unknown of course. 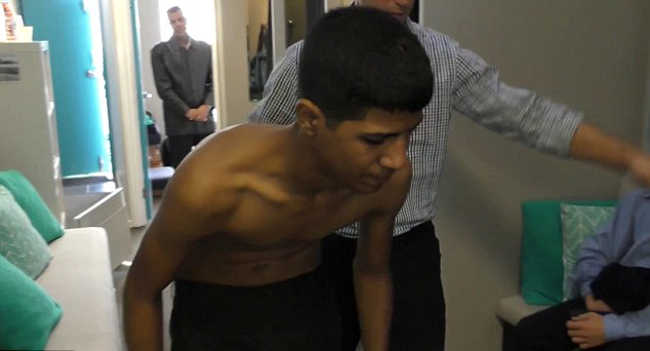 Yes, it was a daunting case, but it would bleed even the coldest stone of a heart, if someone saw Mun lying down, unable to walk. He has lost all feeling of his legs, and for a seventeen-year-old, there can be nothing worse than the feeling of being inadequate, of not being whole.

After being turned down everywhere, Muntathar contacted Chiropractic Excellence in Parkdale, south-east of Melbourne. This institute in Australia had one very well-known doctor by the name of Dr. Ian Rossborough, known for his controversial methods.

And they said they wanted to see him.

With Asmir, Muntathar flew to Melbourne. After all, this was a desperate move, everything to win and nothing left to lose.

During a grueling and ultimately tragic-to-look-at scenes, Dr. Rossborough got to work.

The lightest of touches would make the poor teenager squirm and grimace with pain.

The diagnosis said it was a case of extreme kyphosis. This was a condition that was hard but not impossible to cure.

It would take three back corrections to get him walking again, it was found out, despite him having little to no feeling in his right leg.

After the first day and first correction session, Mun could sleep well for the first time, which is obviously a huge thing. His body was obviously craving the rest.

During the second correction, his neck was fixed and he could hold his head up for quite some time. This was what brought a smile on his face, something he hadn’t done for a long time.

After passing a leg test on his right leg on the seventh day, Mun was seen to walk noticeably and the doctor explained it was basically “heel-toe-heel-toe”.

Mun was cured and returned home and graduated high school; something that seemed like a dream to him for the longest period of time as he lay sleepless in unbearable pain.

The story is one of not just pathos and tragedy, but more about the eventual release, the catharsis when success came at the end of a grueling journey.

We wish Muntathar Altaai and everyone like him all the fortune in the world.