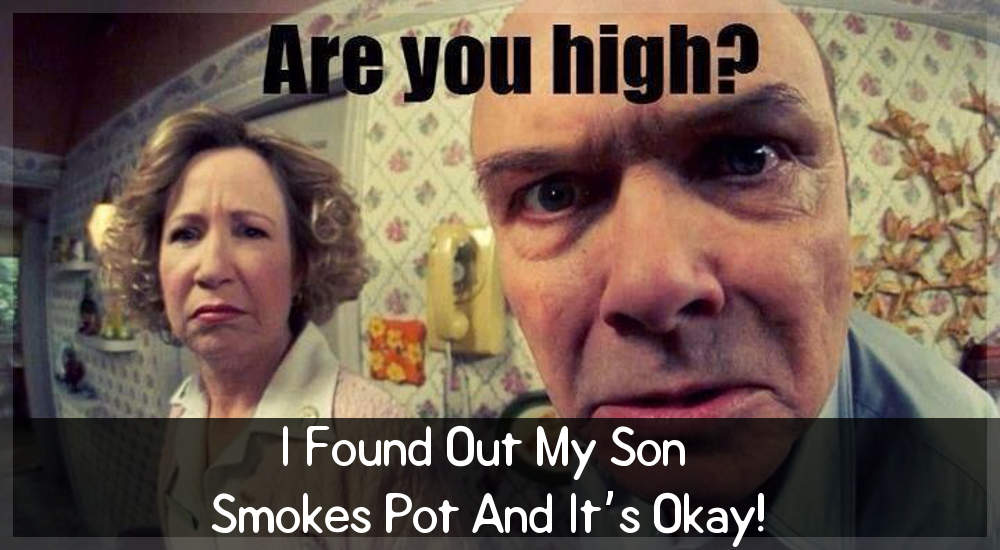 When my son called me about a week ago, he was high on LSD. I could tell something was amiss, but just couldn’t put my finger on it. And so I did what I usually do in these situations, I fished around for the truth. As I talked, listening for strange reactions or illogical sentences, nothing indicated the exact drug influence. It was only later that he told me the truth. At first, I wasn’t pleased.

My son only experiments with LSD, at least this is what he says. I told him he should quit soon, because I wasn’t familiar with the side effects or dangers. I even relayed a story about a guy that suffered brain damage due to “bad drugs”. Of course my son assured me that the drugs were quality. Hmmm, well, that’s not convincing.

But LSD, while I may be a little nervous concerning this drug, is not what I want to talk about. Instead of focusing on my negative feelings about my son’s drug use, I want to explore the positive feelings I’m having.

This is about Marijuana

My son smokes pot, and that’s okay with me. In fact, between Thanksgiving and Christmas, I smoked with him. It was the first time I smoked marijuana with my 21 year old son. He seemed a little shocked at first, but a smile told me that he felt it was a special thing. In his mind, I imagine him thinking,

So, we didn’t have wrapping papers and my son was probably not that good at rolling joints or blunts-it’s not always an easy task. So he created a makeshift water bong from a soda bottle. It was crude, and it smelled weird, but it worked. While his younger brothers were at school, and his father was asleep, we crept behind the house and into a natural grotto among Mimosa trees. This was where we usually had a small pit fire during the summer. It was here that I smoked with my son for the first time.

Now I suppose you want to hear about the cool feelings I had, worry-free antics and some major munchies? Well, I did have the munchies pretty soon after that, but the rest was all paranoia. I will say he had fun watching me be paranoid, and his little brothers seemed to notice I was acting strange, but for me, it wasn’t the same as when I was twenty. But it doesn’t matter. Despite my paranoia, I felt a kinship with my son. I felt a barrier being broken in communication.

My son smokes pot, and he tells me almost every time he does. He makes week infused spicy hot chocolate and other yummy things. He’s happy, for the most part, and he gets exceptional grades. He is fit and he is sociable. There is nothing wrong with my child, and he has even gained some much needed weight since he started enjoying marijuana.

I’m still unsure about the LSD, but as far as weed is concerned, I am happy with that. As I think of a conversation we had two days ago, I am both overjoyed and sad at the same time. While smoking, my son realized something that caused him to break down in tears.

“Mama, I will be destroyed when I lose you.”

It’s not a nice thought, but I realized that, under the influence of marijuana, my son had got in touch with his emotions. For years, my son had problems expressing how he really felt. That night, he told me just how much he loved me in so many words.

So, what’s the point?

The point is, while I probably won’t make it a habit to smoke pot like I used to, and I am still torn about how I feel with the LSD thing, I advocate marijuana. There is absolutely nothing wrong with smoking weed, making pot brownies and infusing hot cocoa with marijuana. I support my son, I trust him and I know he will make the right decisions. Before you lose your mind about your child smoking pot, realize that it could be so much worse. IF they tell you, stay calm. Think about how you are going to respond. Is it worth losing all communication with your son in order to hold your ground? Is it really necessary to attempt to over-rule your adult child? If you aren’t careful you will miss a very important lesson in all this. Allowing your child to experiment with freedom and being able to tell you about it, is priceless. There are so many children who hide the things they do, every day. You may not agree with their choices, but you must, YOU MUST hear them out and let them make their own decisions.

Whether you agree or not, the choice will always be theirs to make.

My son smokes pot and it’s okay with me.

Maybe you don’t like it, but’s that’s okay as well.