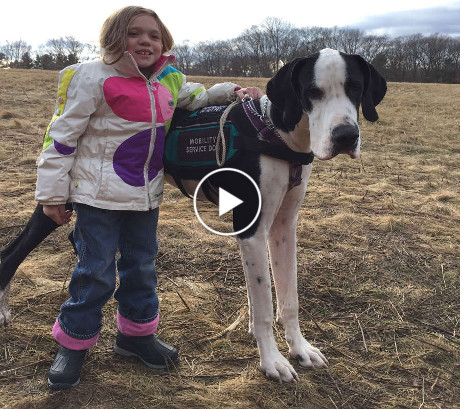 There is a reason for dogs being human’s best friend.

Bella was born with a rare disorder named the Morquio Syndrome, which affects her bone growth. This syndrome doesn’t allow her to grow as fast as her peers, but also affects severely her hips and legs, making walking almost impossible.

At 11 years old, she has undergone 9 important surgeries, yet her disorder is nowhere near tackled. She has tried walking with the help of crutches, walkers, she has used wheelchairs, but nothing provided a sufficient solution until George became a member of her family.

The Great Dane named George is a service dog and has been with Bella’s family for a month. George, according to Bella, has already helped her more than any other therapy. He even takes her to her school and seems to already know where her classes are! However, since he is a service dog, Bella has to be strict about people wanting to pet him.

George is exaclty the one that can help girls in situations like Bella’s, asking for a better life. Here is a video about the life of the two of them together.