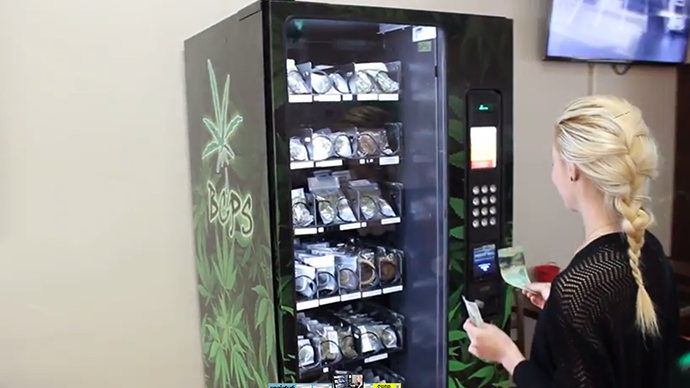 The first cannabis-dispensing machine in Canada has begun operating in Vancouver, following on from the first machine installed recently in the US state of Colorado. The difference? The Canadian machine doesn’t ID you.

Despite the controversy surrounding the plant and the endless bickering that has marked the discourse around it, the machine looks strangely ordinary and even less threatening than a cigarette pack, with big green leaves and certainly no indication that it contains something that is so hotly debated.

“We put it in the vending machine to cut down on theft and handling,” says Chuck Varabioff, of the BC Pain Society, the dispensary where the machine was installed. “It’s packaged up and sealed professionally. So you come in, you buy your product, it’s fresh, it’s quick and easy, and you’re out of here in minutes.”

The box contains a whole host of strains and flavors that are sure to trigger people’s memories of films containing the plant: “Purple Kush, Bubba Kush,” and a range of sativa and indica strains.

The product is sold in quantities slightly bigger than an eighth of an ounce (3.7 grams) and the machine only accepts cash.

But one key difference really sets the machine apart from the Colorado one: it doesn’t take your ID, purchasing is anonymous. This is evident from the video posted by the dispensary on YouTube. You just pay the money and your choice of candy just falls down into the slot.

One other difference between the American and Canadian realities is statistical: the US has over 2.5 million authorized users, while Canada has only 37,000 – although the health ministry believes the figure will go up tenfold within the next 10 years.

The reaction to the machine’s appearance and the feedback received was “incredible” in the three weeks it’s been in operation, according to Varabioff, who spoke to Canada’s Global News.

“Our regular members, they already know what they want, they can walk up straight up to the vending machine and get in and out quickly,” he went on. “They also know we’re not recording any of their sales, and they’re also happy with that.”

There are some potential legality issues to consider here: despite the law stating clearly that dried marijuana isn’t allowed (medicinal or not), the courts recently decided that some legal source is needed, to a “reasonable” degree, when a doctor’s prescription contains it.

An early-April law dictates that the plant can only be sold by licensed producers who operate commercially. The first such orders started this month.

When a poll was conducted, researchers found that nearly 70 percent are in favor of legalization or some form of decriminalization of the plant.