Oftentimes we cannot describe what love is. We read sonnets and sing classic songs, but tend to forget the true essence of it. Once in a while, we read a story that leaves an impression. Bill and Glad Forward’s story will do the same. The duo met as kids and fell in love at 16.

The pair used to ride around the town every Saturday as Bill would pick Glad from her house. Even when they got married and had kids, they religiously followed their cycling routine. They fixed a baby seat to accommodate their children on their short trips!

It indeed was until Alzheimer’s made way into Glad’s brain in 2004.

An Innovative Gesture: The Bike Chair

Bill took care of his wife as her condition worsened. He did not want to break their cycling routine just because Glad’s mobility became restricted. He came up with an innovative idea of a cycle designed to suit the needs of his wife. The cycle looked like a variant of a tricycle with a special chair in the front. 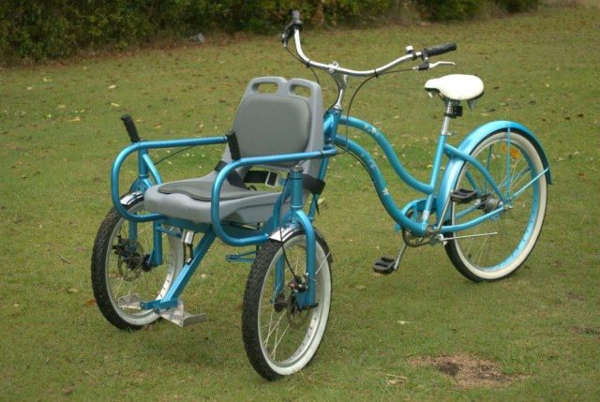 Soon the heartwarming sight of Glad peddling in the front seat accompanied by Bill inspired the neighbors to make a video. It gained over 2.5 million views on YouTube alone. Their unique story then spread on other media platforms, including an hour-long feature story and their own page on Facebook.

Why People With Disabilities Should Be Taken Outside More Often

In Bill’s case, he was trying to maintain their little ritual of cycling around the town every week. In doing so, however, he was helping Glad in several ways. Being outdoors is beneficial for one’s mental and physical health. It gives you a healthy dose of Vitamin D, relieves pent up stress, and increases bone strength. If you can exercise in the open it’ll boost your self-esteem vis-a-vis helping you to maintain your body weight.

It is difficult for people with dementia or Alzheimer’s to venture outdoors. It isn’t safe and they often become bedridden. It is important to step out of the house and just breathe in the fresh air as it has a positive effect on the person. Some studies show how spending time in a natural setting significantly slows down cognitive decline.

Around 30-40% of people with disabilities of some kind end up being depressed. It is a fairly common secondary condition for people who have dementia or Alzheimers. Why is it so?

These people are prone to the waves of environmental, economic, and vocational crises that affect the population at large. They feel alienated from their family and society. This condition leads to a low level of self-esteem, confidence, and the ability to communicate. As a result of this, they get into conflicts all the time that deteriorates their health.

There is no permanent solution to this issue but meaningful social interactions help. Stepping out in the sun with people who are close to them can significantly change their outlook towards life. Bill’s story has inspired many and we as a society must make our public spaces more accessible to disabled people.

Sources:
a) theheartysoul.com
b) goodshomedesign.com