There are days that Monsanto’s efforts to dominate the food supply through its patenting of GMO seeds seem so malicious and abhorrent, that any possibility of regular people and family farms taking back control over agriculture and our food source appears insurmountable.

Yet, there are also days when efforts of activism from regular citizens is turning Monsanto into an ego-driven malevolent organization that’s easily opposed, undermined and cast out. These days a new global activist movement is emerging where small victories in countries around the world – such as India and Peru – illustrate the power that we the people have, when united, to stop Monsanto and put an end to the raping of nature and our earth.

Europe offers a great example of triumph driven by anti-GMO activism, which could easily fuel the drive of citizens in other countries tired of Monsanto seed overtaking farm lands and of food suppliers selling unlabeled GMO’ed products. 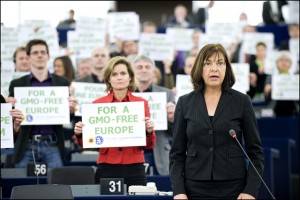 Tolerance for GMO in Hungary is slight, at best, exemplified by the burning of about 1000 acres / 500 hectares of corn in mid 2011. The act was conducted not by frustrated activists or enraged protesters, but by agricultural officials and supported by the government. The Ministry of Rural Development had indicated that Monsanto’s crops were among corn that was ready for harvesting on the burned plantations, although this was never proved by a third-party organization. Both the farmers and Monsanto denied the claims; but in Hungary, officials have a no tolerance policy. GMO cultivation is a criminal offence. Over the last half decade, the Hungarian government has burned other agricultural fields in an effort to eradicate illegal GM crops. Hungary’s deputy state secretary of the Ministry of Rural Development, Lajos Bognar, stated:

The government will continue seed distribution as well as crop plantings in the country to ensure that no GMO seeds will slip past authorities.

Hungary was one of the first on the European Union to strongly oppose the use of transgenic seeds.

Our agriculture is based on biodiversity, on quality, and those we must continue to aim for, without games that even from an economic point of view would not make us competitive.

There was very little GMO cultivation in Italy up to this point, because, frankly, the public opposes transgenic seeds. Italy’s biggest farmers group Coldiretti conducted a survey to assess the public’s opinion regarding GMO crops; the results showed that 80% of Italians are in support of the ban. This is quite uplifting, considering Italy’s culture has a strong culinary foundation and its economy relies heavily on the quality of its food exports.

The farming community and activists in Italy have been strongly opposed to GMO seeds for many years, even leading to publicly-condemned actions of vandalism such as stomping and crushing of GMO crops. Twenty-seven conservation, farming and environmental associations, run as the Task Force for an Italy Free of GMOs, have been coordinating efforts against GMO cultivation and putting up legal roadblocks for anyone trying to grow GMO crops. It seems that these activists have won one battle for the sake of the environment and human health.

#3 – Monsanto Officially Gives Up on Europe

Following the GMO defeat in Italy, Monsanto has officially announced that it will withdraw 8 of its 9 patent applications that are pending with the European Commission. A spokesman for the company, Brandon Mitchener, stated, “[The patent requests] have been going nowhere fast for several years. There’s no end in sight … due to political obstructionism.” Although the MON810 maize was just banned in Italy, it is currently approved for growing in Europe. Yet this seed was the last of Monsanto’s patented seed that was approved in Europe…in 1998…and the decision of its patent renewal, which expired in 2008, is still not finalized. Regardless of what the European Commission decides about MON810 maize, each country in Europe can make its own assessment of the safety of GMO crops and decides if they want to allow their cultivation on their lands or not.

In the US it may seem that Monsanto’s political ties are too strong and advertising budgets too large, for any activist action to make much of a difference. But not for long. People are waking up and they want to know what is in their food supply. Farmers are realizing GMO seeds are not living up to Monsanto’s promises (just watch this video). Environmental groups are realizing the strain that GMO plants are putting on the Earth’s biodiversity. US farmers are starting to realize the freedom they gave up and the power they handed to only a few corporations when it comes to seed (and hence food) ownership. All of this information is quickly spreading through alternative media channels.

GMO’ed foods are already being labeled in about 50 countries, and banned in more than 25. Europe – not just one country, but many – is a great example of what unified grassroots organizations, concerned citizens and informed farmers and politicians can do. In addition to the lack of political support of Monsanto’s patenting efforts, the EU does not allow import of GMO food or feed material through its strong GMO labeling laws. So don’t be afraid to participate – to share information – to act. Become part of an activist effort and start making a difference.

Alex Pietrowski is an artist and writer concerned with preserving good health and the basic freedom to enjoy a healthy lifestyle. He is a staff writer for WakingTimes.com and an avid student of Yoga and life.